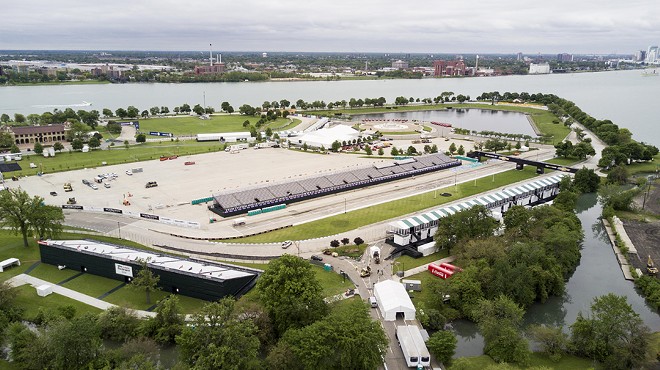 Detroit Belle Isle Grand Prix and state officials have repeatedly claimed that the Grand Prix has a contract in place allowing it to run the race on the public island park through 2018.

But an attorney who specializes in maritime law questions whether that's true. The attorney, Paul Andrew Kettunen, owns a downtown Detroit practice and is working on the case pro bono for Belle Isle Concern. The latter is a group that's pushing to get the Grand Prix removed from Detroit’s 982-acre island park. It contends that an IndyCar race shouldn’t be held in a state park or on Belle Isle.

Kettunen says the Grand Prix was operating under a contract between 2007 and 2014, but no documentation appears to exist evidencing the extension of that contract for races between 2015 through 2018. The contract would provide for the use license and issuance of permits required to run a street race legally under state law.

Kettunen tells Metro Times that Michigan Department of Natural Resources officials have told him that the contract was renewed, but, he says, “it appears that it was not.”

Belle Isle Grand Prix construction just began seven weeks ahead of the race
By Tom Perkins
News Hits
Kettunen also questions whether running the race in a state park is a violation of the public trust doctrine under the Michigan Environmental Protection Act. Essentially, the public puts trust in the state to care for and provide public access to its natural resources. Kettunen says there’s a case to be made that the DNR is failing in those duties, and he's considering a lawsuit.

He and some parkgoers point to a variety of issues on the island as evidence. Among other problems, billionaire organizer Roger Penske’s team poured ten-acres of concrete on a grassy area on Belle Isle’s west side. Each year, the race turns over 20 percent of the island — and what some say is 26 percent of its usable land — into a sprawling construction zone for most of April, May, and June. During that time it’s filled with miles of concrete barriers, miles of fencing, billboards, cables, trucks, and grandstands. Large parts of the island are also to the public for weeks or months at a time.

The Grand Prix runs from June 1 to June 3.

No contract and missing permits

Under Michigan’s City Motor Vehicle Racing Act of 1981, race organizers are required to secure an annual permit from the city in which the race is operating.

Kettunen says the statute "makes it pretty clear that if you don’t have a permit, then you can’t have the race. If these permits aren’t issued, then you’re operating illegally.”

The permits are also important because they require race organizers to submit safety, security, and facility plans. It’s unclear if the Grand Prix has such plans that are in accordance with state law.

The permits were issued when the Grand Prix and city of Detroit developed a contract in 2006 that allows Penske to run the race on Belle Isle. When Detroit leased the island to the DNR for 30 years in 2013, the city and Grand Prix’s contract was transferred to the state. The DNR is believed to be negotiating a new contract with Penske.

Kettunen pored over the contract and found that Detroit issued the permits required under the City Motor Vehicle Racing Act between 2007 and 2011. He says it appears that an amendment to the contract extended it from 2012 through 2014, and issued the proper permits.

Related As Belle Isle’s Grand Prix hits a crossroads, gearheads and parkgoers tussle for its future: Gentlemen, stop your engines

As Belle Isle’s Grand Prix hits a crossroads, gearheads and parkgoers tussle for its future
Gentlemen, stop your engines
By Tom Perkins
Local News
But Kettunen says there’s no evidence that the contract was renewed or the permits were issued beyond 2014, and that means the contract is void. In other words, it appears the race has been running without a contract — and therefore illegally — since 2015.

Kettunen says he has repeatedly asked the city, Grand Prix, and Michigan DNR for copies of the contract and permits for through 2018 races, but none have produced the documents.

Ron Olson, Parks Recreation division chief for the DNR, told Metro Times that he did provide permits to Kettunen, but Kettunen says Olson provided the wrong documents. Kettunen says Olson’s documents are DNR-issued permits that allow the Grand Prix to use the state park, not the city-issued permits required under state law. Olson also repeatedly provided Kettunen with an amendment that extended the race through 2014 that he incorrectly asserts extends the race through 2018.

Grand Prix officials did not respond to a Metro Times request for comment, and Kettunen says race officials are ignoring him. He adds that he submitted request to the city for the permits or contract, but the city responded that it transferred all documents to the DNR in 2013 when it leased Belle Isle to the state.

“The permits carried the race through 2014. What I believe is the case is there was no further renewal,” Kettunen says, adding that failure to comply with the state racing law opens the Grand Prix to public nuisance and public trust lawsuits.

However, the city is leasing the island to the DNR. Is it possible that Belle Isle is now the state’s jurisdiction and the city no longer needs to issue permits? Kettunen says he doesn’t believe so.

“I don’t think that’s accurate,” he tells us. “The city is the owner of that land. There’s no dispute about that — that’s written all over the contract. It is simply leasing the land. That doesn't exempt this act from applying. That would make no sense.”

The roads are also now state trunk lines, so it’s possible that the Grand Prix and DNR could argue that the act doesn't apply. But Kettunen says the roads are still part of the city grid and subject to state law.

A violation of the public trust

Ultimately, it’s not entirely difficult for the Grand Prix to get the permits. Organizers just need to go to the city and show adequate security plans, safety plans, and insurance.

The Grand Prix begins on Friday, so there’s nothing anyone can do to stop it. But Kettunen says the lack of a valid contract could come into play further down the road should he or an environmental group bring a lawsuit against the state and Grand Prix. He says if the Grand Prix doesn’t have the permits and is refusing to get them, or is running without a legal contract, then organizers aren't acting in good faith.

Belle Isle closed due to overcrowding — it's likely the Grand Prix's fault
By Tom Perkins
News Hits
Kettunen adds that he’s considering a lawsuit against the DNR and Grand Prix for creating a public nuisance and breaching of the public trust doctrine under the Michigan Environmental Protection Act.

He contends that the 10-acre concrete paddock, the months-long annual construction, the unknown damage to the environment, and the restricted access to the island violates the act.

“It’s an appropriation of public land for private use,” Kettunen says.

He tells us that public trust laws are typically used in Michigan in maritime law, but the laws have also “been explicitly applied to public parks in New York and Illinois.”

“If we made the assertion that this is a violation of the public trust doctrine and supported that with evidence, then a court should arrive at the same decision as those in Illinois and New York — a judge should accept that," he adds.