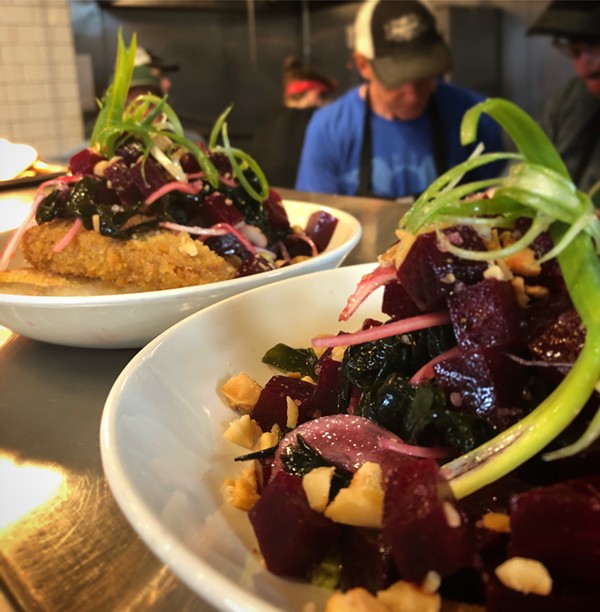 A new Korean-inspired street food and traditional Asian beverage concept called Gogi Seoul Kitchen opens on Tuesday in Royal Oak. The new fast casual restaurant is from the Jolly Pumpkin team and will share a roof, bar, and bathrooms with the brewer, but it will have its own kitchen.

According to a press release, the menu blends Korean and other Asian flavors in dishes like dolsot bi-bimbap (rice, bap sauce, seasonal vegetable and a fried egg in a hot stone bowl) and beet poke salad (roasted beets, orange, ginger, macadamias, and wakame avocado wasabi mash).

“The marriage of fermented vegetables like in kimchi, and sour beer is really a perfect union. We will also serve a variety of traditional Asian beverages, including Soju," Jolly Pumpkin managing partner Jon Carlson says.

In addition to the food, Bastone Brewery – located in the basement of the building – is brewing two new beers that will complement Gogi's menu. Gogi-Wan-Kenobi will be a slightly tart blonde beer, and Raspberry Kitten will be a French-style Saison with raspberry.

The concept was born out of the collaboration between Northern United Brewing Company — Jolly Pumpkin's parent company — and their family and friends in South Korea. That yielded the Playground Brewery in South Korea, and Gogi is the teams' next project.

"What began as an initiative to establish a working knowledge of craft beer and an impactful employment opportunity for NUBC managing partner Jon Carlson’s South Korean family evolved into a cultural partnership and learning experience that both parties continue to treasure," a spokesperson says in a release. "Last winter, Carlson asked members of his culinary team to travel to South Korea and begin research into the culinary traditions and flavors of the region. The goal was to gain a better understanding of South Korean food and culture. The team spent time in the kitchen, at the table and in local markets learning the tastes and flavors revered among Koreans to bring back to Gogi Seoul Kitchen in Royal Oak."