Ask most organic egg and poultry consumers what they imagine organic chickens’ lives are like and they’ll probably describe a bird scratching in the soil, digging for bugs, and kicking up a dust bath on a quaint farm pasture.

However, in reality, many organic chickens are subjected to the same factory farm horrors as conventional birds — their entire lives spent crammed with tens of thousands of other hens in barren, fluorescent bulb-lit sheds with little access to soil or sunlight.

Studies show people who are paying a premium for organically raised chickens usually do so with the expectation that they’re supporting ethically and humanely raised animals. But there exists a gap between what many consumers imagine they are buying and what they are actually buying.

Critics say factory egg farm campaign contributions influenced Stabenow. She did not address that when asked about it by Metro Times, but campaign finance records show that she received a total of $29,300 in 2012 and 2018 from the family that owns one of the nation’s largest factory organic egg operations, Herburck’s Farm. The Saranac, Mich., factory farm is raising six million birds that produce five million eggs daily in Stabenow’s district.

Herbruck's and similar operations opposed the changes — which were supposed to go into effect in 2017 — from because factory farms would’ve been forced to scale back and change their approach to more humanely raise birds, and that would’ve hurt their bottom line.

Thus the rule changes pitted the needs of ethical family farmers and organic consumers against those of corporate, factory farms, and Stabenow sided with the latter. (It’s worth pointing out Stabenow chose big business over less affluent constituents on issues like GMO labeling and financial deregulation.)

“Stabenow decided to align herself not with hundreds of organic farmers spread throughout Michigan, but one that has an outsized influence on rulemaking in Washington,” says Mark Kastel, director of the Wisconsin-based organic watchdog group, Cornucopia Institute. “That was a real betrayal to the values that the organic movement was founded on. The real losers are people who want healthy birds who go outside and have a diverse diet that will create flavorful and nutritious eggs.”

While the USDA's current organic rules address the use of pesticides and synthetic hormones, there’s little about animal welfare. As of now, a factory poultry farm only requires a few meaningless adjustments to its welfare practices before it can market meat and eggs as organic and drastically boost revenues. It's organic farming by packaging, not by practice.

The scenes inside the factory organic poultry farms are disturbing, and Kastel says calling them “farms” isn’t accurate.

He notes that larger organic operations cram up to 200,000 chickens into huge buildings with little natural night or access to the outdoors. Many birds live their entire lives under fluorescent bulbs in poorly ventilated industrial sheds that remain lit for up to 22 hours daily. The farmers keep the birds awake because they grow faster, though doing so is obviously distressing.

The birds can’t escape to the outdoors because in some cases there is no true outdoor access. Factory organic farms, like those that produce Eggland’s Best organic eggs, built enclosed porches with screens, metal roofs, and metal floors that the USDA for reason accepts as “outdoors.” Even if the birds try to get to the porches, the farms only provide a handful of small doors for tens of thousands of hens in perches stacked vertically, so there’s no getting to the exits. Fewer than five percent of organic factory farm birds ever see the sun, some estimate.

Then there’s the waste from up to 200,000 chickens, which builds up ammonia that damages birds' and workers' respiratory systems. Animal rights groups have also report half-bald organic chickens falling into and slowly dying in manure pits.

“These are not farms. These are big, vertically integrated livestock factories,” Kastel says. “To call them ‘farms,’ or to call the operators ‘farmers,’ is propaganda and an insult to people who really get their hands dirty and have everything at stake on these decisions.” 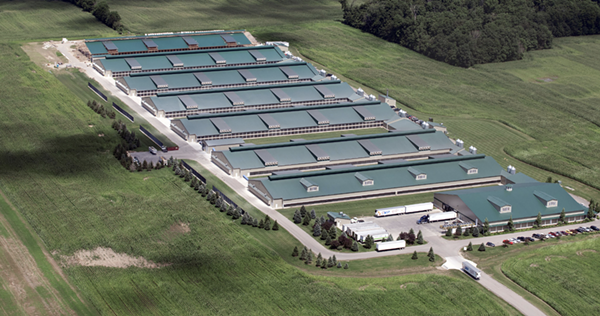 The new rules would’ve banned porches, required more and larger doors, and require two feet of outdoor space and one square foot of soil for each hen. That would have left corporate farms with less room for chickens, thus forcing them to reduce their operations' size. (By comparison, organic birds in Europe are required to have 43 square feet of outdoor space.)

Most smaller scale farms already meet and far exceed such bare minimum requirements because they're principled, but that’s also why their eggs are more expensive. Factory farms cut corners to sell eggs cheaply to unsuspecting organic consumers. And Kastel says that leaves “nowhere in the marketplace for family farms to sell eggs ... because there are too many organic eggs, and they’re too cheap.”

That's confirmed by Joel Goede, who runs Goede Acres farm in Wisconsin with his dad and other family members. He says they provide the farm's 10,000 organic chickens with plenty of indoor and outdoor space, and a barn with good ventilation. There are no porches, and the birds are raised how organic consumers expect them to be raised.

Related Thank your Michigan senators — bank deregulation is on its way

Thank your Michigan senators — bank deregulation is on its way
By Violet Ikonomova
News Hits
Goede says many factory organic farms manipulate the rules any way they can in an effort undercut farms like Goede Acres, which supplies eggs to Organic Valley. He says that's making it increasingly difficult to earn a living producing organic eggs.

"We're faced with not being able to [pay] the bills because the margin isn't there anymore," Goede says. "So we have to bring more chickens in or bring another enterprise in. The new rules would have been a saving grace and leveled the playing field."

He also questions why factory organic farms don't simply switch to conventional farming instead of attempting to mislead or deceive consumers.

"We should give the consumer what they want," he says. "I don't want to say they're tricking people, but that's kind of what it is."

Organic producers also say the rules are about building trust between consumers and the organic industry. The Organic Trade Association, which represents many of the nation's small to mid-scale organic producers, farmers, and other food operations, is suing the Trump Administration and asking a judge to force it to implement the rules.

“The viability of the organic market rests on consumer trust in the USDA Organic seal, and trust that the organic seal represents a meaningful differentiation from other agricultural practices," says Laura Batcha, the OTA's executive director.

Though a spokesperson for Stabenow notes that she “opposed the Trump Administration’s action to completely withdraw the animal welfare rules," her position against them is pretty clear. She joined ten Republicans and two Dems in publicly voicing opposition to the rules, and also joined in an effort last year to kill the proposed changes through a legislative maneuver. 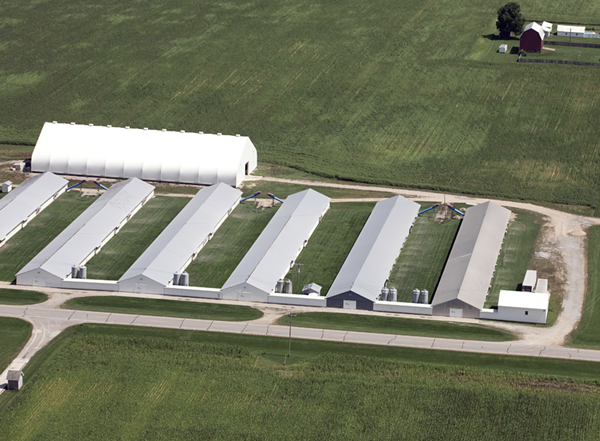 So why are Democrats supporting big Ag over small producers and a majority of the organic marketplace? Kastel says it's a case of agri-business exerting influence over Republicans and Democrats when it comes to the nation's agricultural issues. There are no clear "good and bad sides" because both are in bed with factory farms.

Check out the Cornucopia Institute's organic egg scorecard to find out which organic egg brands are and are not humanely raising their hens.