Domino's Pizza is paving the nation's potholes, but not Michigan's 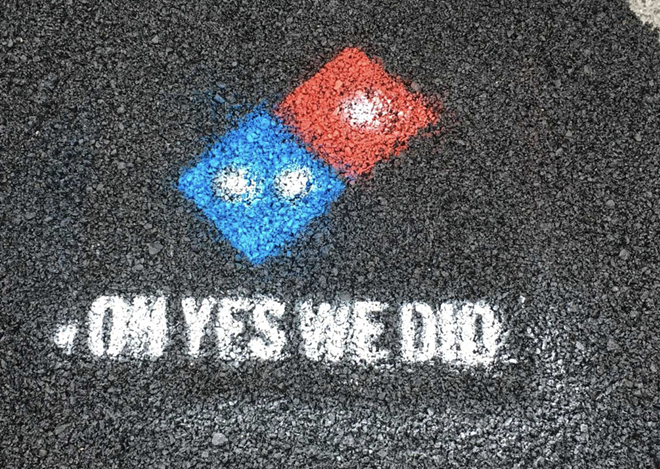 Ann Arbor-based Domino's Pizza launched a rather bizarre marketing campaign in which it's working with municipalities around the country to pave potholes.

Why? To reduce pizza "pizza jostling" and "irreversible damage to your pizza on the ride home," the company says. It even put up a pizza box cam that allegedly shows how your slices bounce around in the box on rough roads.

"Have you ever hit a pothole and instantly cringed?" said Russell Weiner, president of Domino's USA. "We know that feeling is heightened when you're bringing home a carryout order from your local Domino's store. We don't want to lose any great-tasting pizza to a pothole, ruining a wonderful meal. Domino's cares too much about its customers and pizza to let that happen."

We'll skip the debate on the "great-tasting pizza" comment and note that the initiative is called Paving For Pizza, and Domino's says in a release that it fixed 200 potholes across four municipalities. Their crews even tag the potholes, which means the country now has sponsored potholes.

However, even though Domino's is headquartered in Michigan and our pockmarked roads undoubtedly jostle Domino's execs on their way to work, the company hasn't paved over one pothole around here — though you can nominate your city to be among the next to have its potholes filled.

But there's actually more to say about the entire campaign on a deeper level. In the old days, you didn't have to order pizza to get potholes fixed.
Governments used to take care of that. But in 2011 in Michigan, the Republican-led state government raised taxes on senior citizens and handicapped people while drastically cutting taxes for businesses.

Last year, Republicans in Congress and Trump also cut the corporate tax rate, which Domino's CEO Patrick Doyle supported. And Michigan continues to give away billions of dollars of tax payer money to wealthy developers, like Dan Gilbert.