Ron Gurdjian, keeper of the flame at Tom's Tavern, is dead at 78 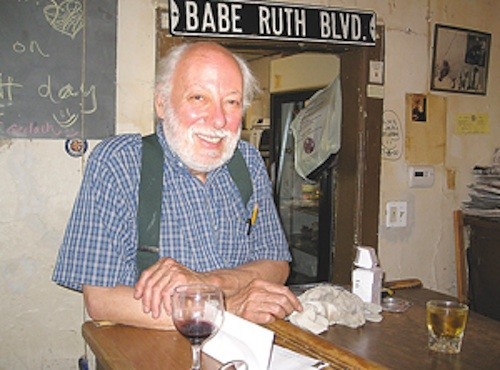 News comes to us this morning that Ron Gurdjian, the co-owner, bartender, and bottle washer at Tom's Tavern has died. He was 78.

Gurdjian did more than keep bar at the venerable watering hole. He was a keeper of history, a storyteller par excellence who often got lost in the boozy reverie the place invited. The ramshackle structure had been a bar back when Seven Mile was a dirt road and Prohibition was the law of the land. Founded by Tom Lucas in 1928 in a house that must have already been old then, it got its liquor deliveries from the fabled Purple Gang. By the 1950s, Gurdjian said, all the businesses along Seven Mile Road wanted the joint torn down, calling it an eyesore. Today, it's one of the few buildings left standing in that part of Detroit.

The bar survived because of people like Gurdjian. Whenever the bar was threatened, people would band together to save it. It didn't hurt that it had high-and-mighty patrons like Bill Bonds and Mike Ilitch. They paid for the replacement televisions when thieves crept in at night and stole them. They paid for materials to rebuild after a fire. Even when a truck crashed into the front of the place several years ago, caving in the front of the building, the job of shoring up the bar went on.

In fact, given the bar's illicit origins, its extreme age, as well as ancient work done without whisper of a permit, and all the additions since then, the bar presented a topsy-turvy quality that invited offbeat customers. The bar tilted back so much you almost had to hold onto your bottle. The uneven floor made customers feel tipsier than they were. On some nights, you could tell the bar was open by the light filtering through the framing and siding.

Without people like Gurdjian, the bar simply wouldn't have lasted as long as it did. He and the bar came to be a sort of package deal. Gurdjian himself says he was practically adopted by old Tom Lucas decades ago. The salty old soul who dared tell the president of Stroh Brewery to "fuck off," took a kind interest in Gurdjian back in the 1950s. Ever since, Gurdjian never strayed far from the bar he loved.

Gurdjian had suffered failing health over the last several years, and when he felt unwell, it often meant the bar simply didn't open. After a recent hospitalization, an online commenter declared that the iconic sign had been removed from the bar. The bartender and the bar both seemed to be in terminal decline.

A week or two ago, friends of Gurdjian and the bar asked that social networking users post pictures of Gurdjian at the tavern, as scrolling through the images gave the longtime host a bit of joy, a pale shadow of the faces he'd see across the bar or across the grill cooking up steaks in the back yard. Then, this morning, came news that Gurdjian was gone. One is tempted to imagine him now joining the bushy-browed Lucas at that great smoky barroom in the sky.

The future of Tom's Tavern, at this point, is uncertain. Even if it were to disintegrate in a strong wind this afternoon, you have to admit, 90 years is one heck of a run for any bar. As to whether the patrons will be able to gather the resources to keep it running, that question is best left for another day. Here's to you, Ron, and not just for filling our glasses. You filled our hearts.