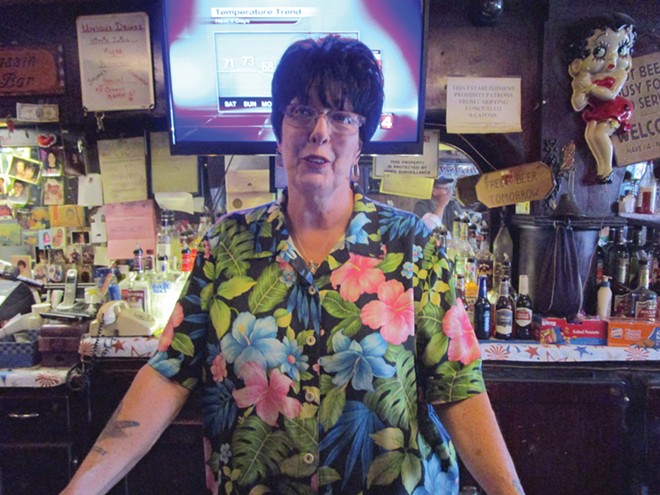 When Metro Times last spoke with Beverly "Mama Jo" Sassin, the longtime owner of Detroit's Cas Bar, we were charmed by the tough-as-nails matriarch, writing that the scene at her bar was "like family — at least a family that might lovingly rib you."

However, officials say that Sassin, 70, ran more than just a tiny dive bar. On Monday, Dearborn Police announced that they believe Sassin was the leader of a long-running organized crime ring. According to police, Sassin hired heroin addicts to steal goods from big-box stores like Meijer, Home Depot, and Target, and then re-sold them out of Cas Bar. There, police say they recovered loot including guns, liquor, arcade games, and some $620,000 cash.

"It's a million-dollar operation," Dearborn Police Chief Ron Haddad said, according to WJBK. "This is not somebody looking for a deal at Christmas time or buying used merchandise from a friend."

Along with Sassin, three others — Amanda Lynn Mosed, 38; Jodie Beth Welbes, 49; and Christopher Bucannion, 45 — face eight felony counts related to the case, according to The Detroit News. Sassin, Mosed, and Welbes received $100,000 bonds, while Bucannion received a $250,000 bond along with two gun charges. All four are due in court on Friday.

Sassin has owned the bar for at least the past 20 years, purchasing it from an ailing friend of her late husband.

"He ended up really sick, and he knew he wasn't going to live long, so he came to me and said, 'I want you to buy the bar.' And I said, 'I don't want to buy the bar,'" Sassin previously told MT. "He said some guy downtown wanted to buy it, and 'I don't want to sell it to him. I want you to take it.' So I said, 'Hmm, alright. I guess.' It's not like I haven't been doing it my whole life."

The bar, which had a legal capacity of less than 50 people, had become a favorite, drawing plenty of regulars. But the bar's status as a beloved dive could soon come to an end, with officials saying they are trying to get the bar padlocked.

Related The unchanging scene at Cas Bar is all about ‘family’: Still the same

The unchanging scene at Cas Bar is all about ‘family’
Still the same
By Michael Jackman
Sloshed
Stay on top of Detroit news and views. Sign up for our weekly issue newsletter delivered each Wednesday.