A legacy, deliciously seasoned: An ode to Olga's Snackers

On Monday afternoon, it was announced that restaurateur and pita bread pioneer Olga Loizon had died. She was 92 years old.

Many may know Loizon as the founder of Olga's Kitchen — home of the Original Olga sandwich, Peasant Soup, Orange Cream Cooler, and perhaps most notably, the Snacker. Drawing inspiration from Greek souvlaki sandwiches (Loizon was a second-born daughter of Greek immigrants), Loizon overcame many obstacles to start a modest restaurant operation in Birmingham in 1970 that was based almost entirely around her homemade pita bread. After a buyout, some expansion, franchising, and a name change, what she whipped up became a metro Detroit staple.

If at any point you visited a Michigan mall in the late '90s to early 2000s, chances are you were seduced by the scent of Olga's Kitchen — a seasoned symphony of "grilled to order" bread wrapped around a blend of lamb, beef, sweet onion, and tomato, and dripping in Olgasauce.

As a teenager growing up during what I believe were the death throes of mall rat culture, Olga's defied lunch table cliques — at least for me. If you shopped at Hot Topic, you ate at Olga's. If you fancied distressed, low-rise, bootcut jeans from American Eagle, you ate at Olga's. Or, if you were like me, and shopped primarily at thrift stores but would regrettably drop $50 dollars on a sweatshop sweatshirt from PacSun or Gadzooks (remember Gadzooks?!) with a brand name plastered across it just to avoid a sideways glance on my way to English class, then you likely ate at Olga's. I know I did. A lot. 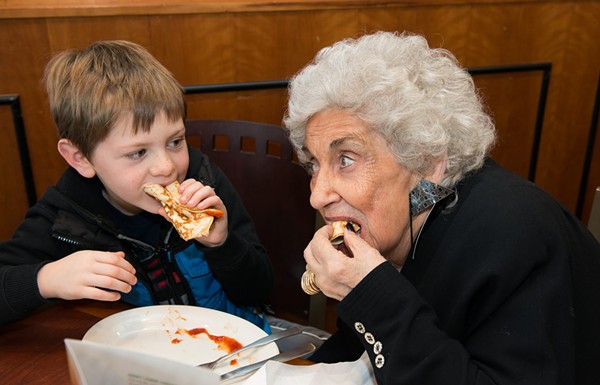 My best friend of 25 years, Jaclyn Bialokur, spent the ages of 15 to 19 as a server at the Olga's Kitchen located at the once-bustling Lakeside Mall in Sterling Heights. While she looks back on her job fondly, I remember it even more so because I reaped the benefits of having a best friend who just so happened to work at the best restaurant in the mall.

"We would mess up orders on purpose to what we liked to eat so we would have to take the food back to the kitchen and eat it ourselves," she admitted to me over text message while reminiscing over her Olga's years. “I never got sick of it and love it to this day. I really loved that time.”

Bialokur, who now works as a hazardous waste coordinator, reassures that the bread is, in fact, the secret to Olga’s greatness and that each sandwich is grilled to order as famously advertised. Perhaps the greatest perk of having a best friend who worked at Olga’s was the endless pile of Snackers on which I lived for several years.

Who would have thought that a basket of tiny, triangle-shaped, elegantly seasoned fried-dough calorie bombs paired with a sweet and rich Swiss almond cheese (that was often served so cold that it would bend the Snacker upon dipping) could provide such a visceral teenage memory? A symbol of simpler times, perhaps? It was pre-Amazon, pre-gluten-free, pre-memes, pre-smartphones. At the time, there was no greater pleasure than going to the mall unsupervised. Sitting across from my friend after her shift, talking shit over curly fries, a hijacked Orange Cream Cooler, and some crazy, custom secret menu concoction the kitchen staff threw together, we, like Loizon, were dreamers. We knew what we wanted to do, but had no idea how to do it. We anguished over boy drama and curfews, scheming how to afford Blink-182 tickets. We were living in a pre-nightmare socio-political dystopian era. Fried bread was good enough to be great.

After filing for bankruptcy in 2015 and switching hands a few times, Olga’s Kitchen made a move to exit several malls and invest in free-standing restaurants, while renovating others. Among the locations placed on the chopping block, however, was Lakeside Mall.

“We were like a little family and I think Olga created a lot of that,” Bialokur adds. “She would stop in every once in a while and say hi to everyone. Makes me really want that job back lol.”

We agree to catch up over some Olga’s next week. When I confirm that I have permission to quote her for this story, Bialokur had this to say:

In lieu of flowers, the Loizon family has requested that check donations be sent to the Olga Loizon Memorial Fund at 17800 Laurel Park Dr. N., Ste. 200C, Livonia, MI, 48152. Donations made to the foundation will benefit young women with a passion for entrepreneurship.

So many restaurants, so little time. Sign up for our weekly food delivered every Friday morning for the latest Detroit dining news.