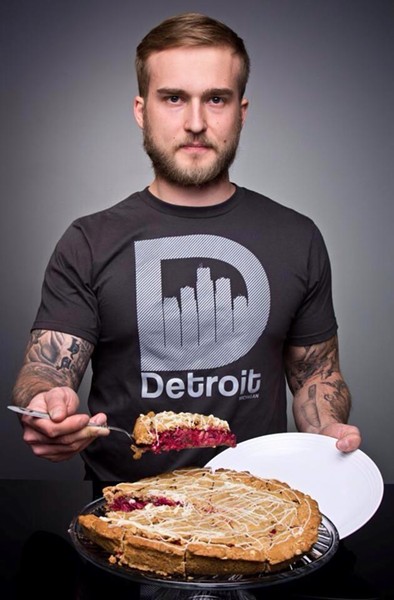 When Rock City Eatery chef and co-owner Nikita Sanches began plying his trade in Hamtramck in 2013, he did so at a time when metro Detroit's restaurant industry's epicenter was only beginning to shift from the suburbs to the city. Rock City, which Sanches describes as "American with global influences," quickly made its name in downtown Hamtramck, serving everything from mac and cheese to ramen to Mexican-style beef tongue to Spanish-style tripe.

But after several years in the tiny location, a much larger spot on Woodward Avenue along the future QLine route opened up. It sits a few stops from downtown's arenas and stadium, so Sanches headed south.

After five years of success in two vastly different neighborhoods, the 34-year-old holds a unique perspective on the city's evolving restaurant industry. Perhaps Sanches's most interesting observation is one that doesn't get mentioned much — the customer is changing as much as the industry, and that presents a whole set of questions and challenges for downtown chefs. Metro Times sat down with Sanches for a quick chat about how the region's restaurants have changed over the last five years. The interview was delayed by a surprise visit from the health department, which we're happy to report Sanches passed with no violations.

Metro Times: What in the Detroit restaurant industry changed for the better over the last five years?

Nikita Sanches: It's awesome because way more options and you can get any cuisine you crave, and just more people coming to the city to eat instead of going to their local suburban restaurant, which kind of sucks for the suburban neighborhood spots. That's part of why so many places closing in the burbs — because people are looking more toward going downtown, having and eating out in the city. But there's also more competition down here.

MT: So what's changed for the worse?

Sanches: It's a double-edged sword. more people coming down and there's more traffic, but it also brings out people who don't necessarily understand that not all restaurants are like Applebee's or Chili's or Outback Steakhouse where you get a bread basket and butter, and you can have 50 things on the menu, you know what I mean? So it's like the quality of a diner has maybe changed somewhat. But, I would say 99.9 percent of people that eat here are awesome.

MT: What are the pros and cons of moving from Hamtramck to Detroit?

Sanches: The good thing about it is we've got more space and an actual kitchen now. We had a little closet of a kitchen in Hamtramck, and it still blows my mind how much food we were able to crank out of there.

The most negative thing is our overhead is crazy — our bills are way higher compared to what it was in Hamtramck. And I miss Hamtown a lot just in general because we actually had local regulars that would come in all the time, and it was a very community-oriented restaurant where here it's mostly the traffic of people going to a game and coming in and just trying to get out. You don't have as much camaraderie with your customers, so I miss that.

So there's the good and the bad. If I had a choice right now, I would definitely want to still be in Hamtramck and have this intimate little spot where you know everyone's name, kind of like Cheers.

MT: So you mentioned the customers are basically changing as much as the restaurants?

Sanches: Yes, the first wave of customers were people who want trendy food and to go to places right when they first open. So they come back a few times, and you're like "Oh, this is my customer base." what ends up happening, those people filter out and they move onto the next hotspot and what you end up with are regular people who were like, "Oh I heard about this place, I'm gonna try it out." And if they like it there, they are the ones that are going to come back. We've traded people out ... and it gets frustrating because it's hard to figure out like who am I really catering to? Is it these cool, trendy people who try new places all the time? Or is it people from Farmington Hills or Oxford going to Detroit for a game?

When we opened in Detroit, it took a year to kind of find our footing again, and I'm just kind of narrowing the menu down to where we are, which is comfort food with a twist. And we don't do as much adventurous stuff as we did back in Hamtramck because we get a lot of people who just are not interested in that. ... We get people who feel comfortable ordering and eating a burger.

MT: But I read somewhere that there are too many burgers in Detroit.

Sanches: Well, it's like people love burgers, people love comfort food. It's funny you bring it up because I'm thinking about going very burger heavy on the next round of menu changes for the summer.

It's not about me and my ego and doing stuff that's exciting for me. It's about people that just come and eat and pay my bills, essentially. So, why not? Why wouldn't I just give them what they want?

MT: What's your favorite beer at the moment?

Sanches: High Life. To be honest, I'm not a huge craft beer guy. I'm not big on IPAs, and it seems like every brewery just focuses on just triple, quadruple IPAs and it's just like, "How much hops can someone fucking take?" But I would say anything from Batch Brewery is amazing because they do a really good job. They actually produce great beer on a small scale and it's just a great product.

MT: What would you be doing if you weren't a chef and restaurateur?

Sanches: It would be cool to be a truck driver — just you and the road. No one to deal with, nothing to worry about. Just like, OK, so I have to go to this spot to pick something up and I got to go to this spot to drop it off and ... drive across the country, behind the wheel, taking it in, and seeing places.