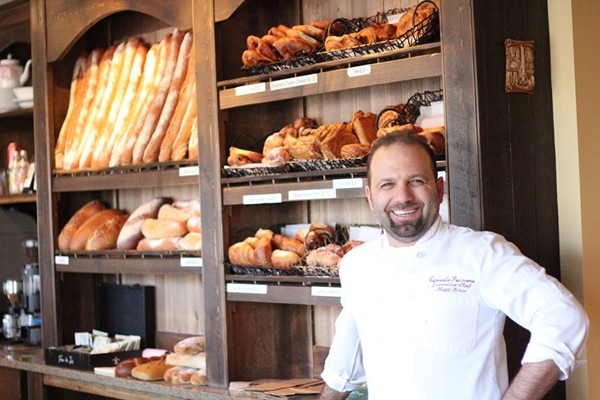 The new shop is at 45 Grand River Ave. across from Lovers Only.

Knio has already established himself as one of the city's best pastry chefs, and the shop will offer a range of macarons, cookies, eclairs, cakes, croissants, danish, bread, coffee, sandwiches, salads, and more.

Those familiar with the Birmingham location will find the same formula and menu in Detroit, Knio tells Metro Times. The big difference will be the design, which he says is much more modern in Cannelle's Detroit store.

Knio trained in France before moving back to Michigan in 2002 and taking over as the Ritz Carlton's pastry chef. He opened Cannelle's Birmingham shop after a different unsuccessful venture. Knio notes that he uses all top-of-the-line ingredients and doesn't take any preparation shortcuts.

The bulk of Cannelle's business comes through Knio's wholesale baking arm, Golden Wheat, which starts baking at 6 p.m. each evening to make fresh goods that are delivered each morning.

Knio says he set up in Detroit's Capitol Park because it's accessible to downtown's business and residential areas.

"The city is coming back, and my friends are opening restaurants here, so I want to be part of what's happening," he says. "I think the city is going to be awesome. It's already nice, but it will be on a whole different level in a few years."