Bill Metzger, the co-publisher of bimonthly magazine Great Lakes Brewing News, found that out this week after causing a social media firestorm and after a swift backlash from brewers.

Why the furor? Here’s the very first paragraph of a 4,000-word … uh, “review” of Scottish cask ales, featured in the publication's February/March issue:

Like most men, I struggle with my primal self. It’s genetic. Put in Freudian terms, the battle between my id and my superego can be epic. And in the age of #metoo, the dilemma has grown. The pendulum has swung too far. One aggressive move and a man’s career can derail. I feel the walls closing around me, my room to move shrinking.


The article goes on (and on, and on) and only get worse from there. It's a stunningly sexist rant about primal urges, women’s “need-to-breed gene,” heroic historic Scottish rapists, the author’s “instinct to bed every woman I see,” and his noble resistance to the “feminazi re-education program.” Oh, there’s also the part (again, still in the first paragraph) where the author compares himself favorably to “that great seducer, Don Juan,” insisting that “I’ve given the legendary womanizer a run for his money.”

This puerile trip through the mind of Metzger, apparently to the surprise of no one but him, did not go over well with readers who were expecting recommendations on cask-aged ales and not a manifesto of misogyny.

Reaction from the brewing community was swift, brutal, and pointed. A change.org petition was created, calling for breweries to ditch GLBN. #MetzgerGate and #DonJuantoTalkAboutIt hashtags appeared. Ontario’s Muddy York Brewing Company, whose brewery was featured in a column right next to Metzger’s, tweeted in horror: “OMG what is that garbage on the left? We are so appalled and disappointed that we are in [ linked to this publication. We in no way agree or endorse any [of] it. Great Lakes News your publication and anyone linked to it are no longer welcome at Muddy York.”

OMG, what is that garbage on the left? We are so appalled and disappointed that we are anyway linked to this publication. We in no way agree or endorse any if it. Great Lakes News your publication and anyone linked to you are no longer welcome at Muddy York.


Glasgow CAMRA (Campaign for Real Ale) fired off this:

“Dear Bill Metzger, please improve your attitude to women before your next visit to Scotland. We have enough sexist oafs putting women off beer already. #RealAleIsForEverybody.” Three of Detroit’s microbreweries, Axle, , and Batch Brewing, swiftly reassured customers that they would not be advertising with or distributing the publication.

Dear Bill Metzger, please improve your attitude to women before your next visit to Scotland. We have enough sexist oafs putting women off beer already. #RealAleIsForEveryone https://t.co/qyHuvhJO1t


Beer columnist Robin LeBlanc took to her blog Thirsty Wench to write down her thoughts in a late-night takedown.

“I knew women's reactions to this piece going to be brushed off by some men as ‘just a joke,’ and I felt a need to explain why no women (or men) were laughing,” LeBlanc tells MT. She says she also found Metzger’s “it was just fiction” follow-up patently ridiculous.

“Why out of your way to make your story as creepy as possible using opinions and points of view that several men loudly regard as factual?” she says. It’s like “seeing a giant ‘NOT WELCOME’ sign, which as any woman in the beer world will tell you, is something we deal with a lot.”

(The comments on her blog post are exactly what you expect: an eerie collection of incels, MRAs, and would-be calling the author every sexist name they can find.)

Great Lakes Brewing News — which distributes free issues to breweries in the Midwest, New York, and Ontario — issued an equally bizarre statement on Facebook on Tuesday, saying that “Los Testigos de Cerveza” stories are parodies and this one was erroneously published without a disclaimer. It also included a statement from Metzger, who said the article was “a simple parody of a disgusting attitude I have seen often.”

“As the narrative was in the first person, I overlooked how this article could have been taken literally and that the offensive views of the character could be considered my own,” Metzger wrote. “I sincerely apologize.”

The “Los Testigos de Cerveza” column (already a cultural appropriation, but we digress) last appeared in 2007 and was written in the third person, rather than the first-person narrative in the more recent article. As GLBN noted, there was no disclaimer that the work was a piece of parodic fiction, and it featured Metzger’s byline. In any event, even if it was intended as parody, it simply isn’t funny. Or topical. Or anything, really, other than bizarre and disturbing. (We think they might mean “satire” rather than “parody,” unless Metzger is parodying his own writing style.)

Reached by email for comment, Metzger directed us to GLBN's online statement. Metzger’s official next-day explanation, by the way, starts by informing the reader that he had just finished reading a book on Voltaire and the Enlightenment, then declares, “As with any advance in civilization, there are vociferous opponents who inevitably are protecting their own interests. In short, reactionaries.”

Just who these reactionaries are is unclear, as is how his supposed parody addresses any of the problems caused by misogyny in the beer industry, the French Age of Reason, or elsewhere. A later version of the statement replaced the final line, which read “I apologize to those who have been offended, but will remind all that we have been delivering great beer news to a great industry for 30 years” with the simpler “I sincerely apologize.”

Metzger’s apology did little to impress some women in the industry, who say they have long been accustomed to that sort of sexism. Courtney Burk, the marketing and sales director at Batch Brewing Company, says she knows all too well the culture that Metzger’s article celebrates. Last month, with the full support of Batch, Burk launched the “Dicksmasher Industry Night,” a monthly event for women in the industry to support each other and collaborate. 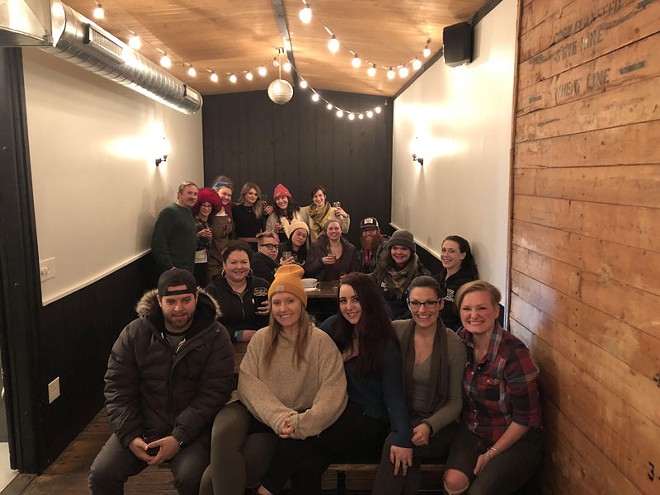 “This industry is filled with people that are no longer afraid to call out insulting, gender shaming, sexist garbage, and that’s exciting,” she says.

Kerri Dahlhofer, founder and co-owner of B. Nektar, agrees. “If you're worried about [backlash] it says more about your character than it does about society's ‘pendulum’ right now,” she says. “There really is no place for this kind of rhetoric anymore.”

Miranda Johnson, the publicist marketing director for B. Nektar, was also offended by the article.

“With the way women are spoken about in the story, we need to just roll over and make it OK to write that way?” she says. “In an industry publication?”

She says she’s relieved to hear that the article was met with overwhelming disgust, and believes things are getting better for women in the brewing industry in the #MeToo era.

“I have personally witnessed amazing support from other breweries, colleagues, and groups that will not allow for this kind of attitude to grow toward any human,” she says, “not just women.”

The full Great Lakes Brewing News story is below:

See related PDF glbn.pdf
Stay on top of Detroit news and views. Sign up for our weekly issue newsletter delivered each Wednesday.