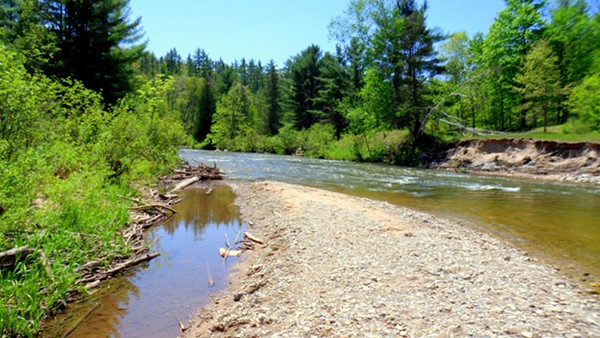 Mother nature is great and all, but it's best experienced with an icy cooler of cold brews.

That's the message angry Michiganders sent to authorities after the
U.S. Forest Service announced a ban on alcohol on the Au Sable, Manistee, and Pine rivers that was supposed to go into effect in May.

The order prohibited alcohol use on or within 200 feet of the three rivers that run through the Huron-Manistee National Forest, but it did not apply to private campsites.

A petition on Change.org to stop the ban is up to 44,000 signatures. Part of the outrage resulted from the stiff penalty for violating the ban — a fine of up to $5,000 and up to six months in jail.

The order is also causing concern in the business community, which fears that tourists will go elsewhere rather than doing the unthinkable and gingerly floating down a river without booze. The Free Press reports that some people already canceled reservations at campgrounds and canoe liveries.

Nate Peeters, public affairs officer for Huron-Manistee National Forests, told the Free Press that intoxicated individuals on the river have needed to be rescued from the water, have assaulted others, and pollute the rivers with cans and bottles.

"This behavior is really excluding families and youth groups and other community members from experiencing safe and enjoyable recreation on the rivers," he said.

The U.S. Forest Service is considering alternatives and should have some to present by May.