How to support Detroit farms, not resalers, at Eastern Market On a recent Friday morning on the one-acre Brother Nature Produce farm in North Corktown, Greg Willerer and an employee cut field greens in a field filled with everything from French sorrel to mustard greens to edible flowers to edible weeds like lamb's quarter and purslane sprouts.

"Things that don't usually make it into a salad," Willerer says.

The greens were washed, then either sent off to local restaurants like Supino, Mudgie's, and Pink Flamingo, or mixed and put in bags to be sold at Eastern Market the following day.

The Brother Nature stall in Eastern Market sits among the dozens and dozens of vendors selling produce. Its "spicy mix" is excellent — a jumble of mizuna, a mustardy, peppery Asian green and edible weeds, baby Chinese cabbage, and other greens.

Everything at Brother Nature's stand is grown in Detroit, which is much more unique than you might think. While Eastern Market may seem synonymous with local food, many of its produce vendors are simply resalers who go to the Detroit Produce Terminal in Southwest Detroit to buy produce that arrives by truck from all over the country. 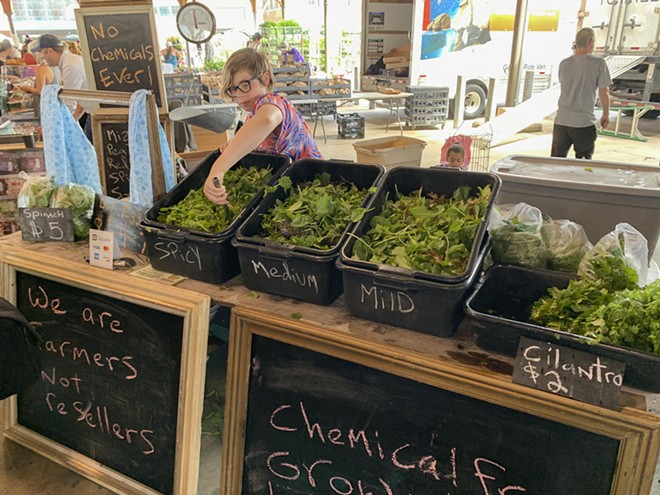 But a small group of vendors — including Brother Nature, Rising Pheasant, Grown in Detroit, City Commons, and Diamante Gardens — are growing their produce in Detroit, and there's myriad reasons to support them.

First, there's the economic benefit. Buying food that's grown in Detroit keeps money and wealth in the area as it's circulated among local employees, suppliers, and businesses. While buying from a resaler who purchases produce from California helps the resaler, there's less of an economic impact because it ultimately benefits a farmer across the country.

But there's no point in buying the produce if it doesn't taste better, and Detroit-grown produce is clearly superior. It's all about freshness, Willerer says.

"When you're getting stuff picked that day from us, you're getting something that's so much better than what's grown with fertilizers and chemicals, or, even worse, stuff that's been sitting on a truck for 10 days," he tells us.

Detroit farmers are also organic. Though they may not have the USDA Organic seal, which is expensive and out of financial reach for most small producers, they don't use fertilizers and pesticides. At Brother Nature, Willerer's pest control is a clear tarp, and there are some nibble marks on some of his greens, but he says, "My customers generally understand that produce isn't going to look perfect."

Brother Nature composts coffee grinds from Corktown's Astro Coffee and grains from Motor City Brewing Works. That helps build the nutrient-dense soil from which everything sprouts.

"Everything is grown without the chemical input so your body is actually getting minerals," Willerer says. "We grow stuff in mineral-rich soil and we're not relying on chemical fertilizers. [Farms] that sell to Meijer just spray chemical fertilizers and pesticides on their fields, so it might look good, but do a nutrient and density test — it's just nitrogen. It makes a plant grow, but it doesn't help your body at all."

Detroit's farmers can be found scattered throughout Shed 2 in Eastern Market, and some are calling on market management to more clearly distinguish between local and non-local produce and producers. In the meantime, Detroit's farmers selling at the market are working together, Willerer notes.

"We're trying to grow together and support each other, and our competition is more from resalers who front like they're local growers," he says.