Detroit’s Hammer & Nail bar hits it on the head

I didn’t know I needed a Pink Squirrel in my life until someone handed me one last week. The last time I’d tasted one was the disastrous result of my grandparents’ liquor cabinet, a bunch of broke college students, and a copy of Old Mr. Boston Official Bartenders Guide.

This one was significantly better. And it reminded me that the cocktails of the 1950s and '60s, like an Eames design, can be spankingly good if done right. The drink is indeed cotton-candy pink, but the creamy, chocolate notes are balanced by the nutty flavor of the Crème de Noyaux, specially ordered from San Francisco. The Pink Squirrel, like the rest of Midtown’s new Hammer & Nail bar, is just the sort of playful take on vintage bars that Detroit needs.

Every inch of space in Hammer & Nail, which opened to the public last Friday, is meticulously planned. From the newly restored neon sign adorning the back bar, all the way down to the cocktail napkins and the straight-out-of-The Jetsons glassware, simplicity reigns. The bar is sleek and elegant without being cold or unwelcoming, thanks to the giant windows and warm wood tones. The pared-down aesthetic reflects the 1966 building’s vibe, recently restored by new owners the Roxbury Group.

Hammer & Nail serves a Harvey Wallbanger that tastes just about as good as a Harvey Wallbanger can be made to taste with the addition of a cask-aged sherry. One less familiar drink, though, stole my heart. The Moonwalk features crisp grapefruit, cava, rose water, and Grand Marnier in a delicate skyscraper of a glass. It’s modeled after a cocktail created at London’s Savoy Hotel for the triumphant Apollo 11 astronauts in 1969. Most of the drinks feature simple ingredients, carefully researched and prepared.

With so few ingredients there’s also no room for error. Fortunately, the team of general manager Rick Paulger and head bartender Desmond Oliver bring a deft and confident touch and aren’t afraid to play around a little. Both are industry veterans and spent a lot of time at another Roxbury property, Buhl Bar, combing over every last detail for Hammer & Nail’s opening. It shows. 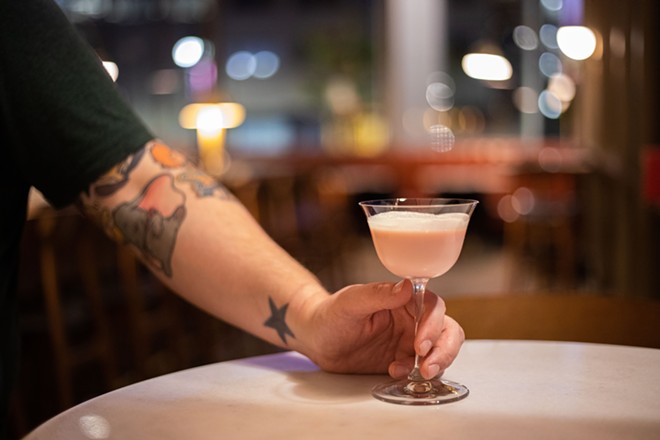 The glassware, says Oliver, was the subject of long discussion. They knew exactly what they wanted for the tumblers and Collins glasses. Although they weren’t able to snag enough of the iconic midcentury Dorothy Thorpe roly poly glasses, “we just wanted to get as close as we could to that hand feel. I believe it gives a little space race, rocketship kind of vibe.” The martini glasses were modeled after one featured in a photo of Frank Sinatra giving a toast.

Those able to snag a seat in one of the walnut and leather banquettes that line the edges of the bar feel like Nixon-era power brokers. Come spring, Hammer & Nail’s space will include a spacious patio facing Woodward Avenue, with plenty of spots to ogle the fashionable set attending Orchestra Hall right across the street.

Draft cocktails include a Highball and a nitro-poured Black or White Russian made with house-made coffee liqueur. Says Oliver, “It’s all drinks that Grandma would’ve loved,” Oliver says. “They haven’t been touched by the craft scene, really, and I thought that it was due for a revival. We just took a stab at it and we’ve kind of fallen in love with it.”

Detroit’s cocktails scene is moving on from twee coupe glasses and denim-apron-clad mustachioed bartenders waxing rhapsodic about 19th century genever recipes. Not that there’s anything wrong with that, but Detroit needs another baroque cocktail menu like it needs another surface parking lot. Royal Oak-based Bowlero’s funky retrofit is one example of our willingness to expand our horizons; in Hammer & Nail, we have further proof that there’s more to cocktails than dusty Victorian recipe books. In fact, Oliver found some of his recipes in Good Housekeeping.

“There’s a lot of the same cocktail bars,” Oliver says. “We wanted to do something less serious, a little kitschy, a little fun.”

Simple and streamlined, and yes, a bit fun, the drinks and decor at Hammer & Nail are a refreshing leap for mankind — or at least for Detroiters looking to try the unfamiliar.