OK — so, maybe not everyone, but the folks over at Detroit's popular ramen restaurant Johnny Noodle King have concocted a cheeky idea to raise money for a good cause and satiate all your nudie noodle fantasies without forcing you into the dang doghouse.

The brainchild of Johnny Noodle King restaurateurs Jacques and Christine Driscoll, the first ever Tasteful Noods Calendar features Johnny Noodle King staff, as well as one lone Green Dot Stables employee and a friend of the Driscolls who appears as the calendar's very nakey cover star.

“The project itself was a long time coming, I'd say in total from the time it was first dreamed up and said out loud until now, about 4 years have passed,” Christine says. “We've used the ‘Tasteful Noods’ reference for years, maybe even since we opened in 2014.”

Tasteful Noods will get a proper release party on Nov. 24 at Bagley Central, located at 2545 Bagley St., and will offer food from conjoined neighbor Peso Bar, as well as sweets from Yellow Light Coffee and Donuts. Yellow Light is the latest endeavor from the Driscolls hospitality group which is slated to open early next year in the Jefferson Chalmers area, and it will offer affordable small-batch fare ranging from house-made doughnuts to fried chicken sandwiches. 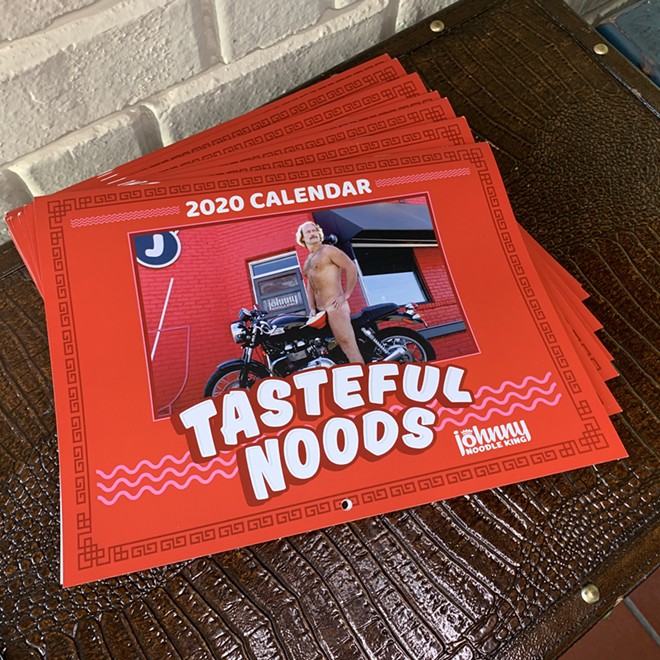 Calendars are $10 each, three for $20, or five for $30, and proceeds will benefit Friends of Detroit Animal Care and Control, which, per the website, aims to assist DACC in “volunteer management, donation solicitation and acceptance, and live release, which includes shelter intervention.”

Christine says that volunteers were not hard to find and credits Johnny Noodle King's “amazingly creative” personnel for making the project a success. She also says the creation of the calendar has been one of the better bonding experiences she's shared with their team.

The free event starts at 5:30 p.m. on Sunday, Nov. 24. More information can be found by visiting the event's official Facebook page.