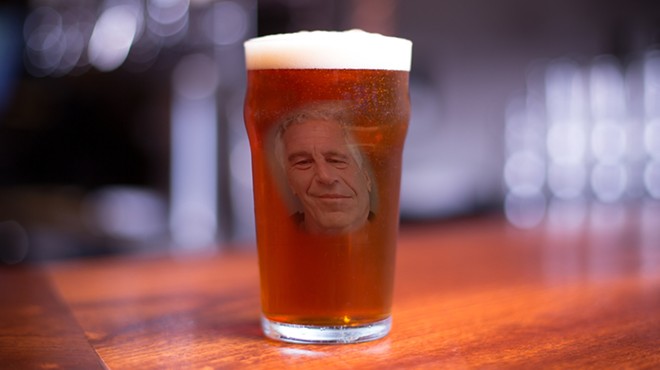 Jeffrey Epstein — the mysterious financier and convicted sex offender who is alleged to have trafficked girls for an international sex ring, and had ties to President Donald Trump, the Clintons, and Prince Andrew — was found dead in his jail cell in Manhattan while awaiting trial earlier this year. A medical examiner ruled Epstein died by suicide from hanging.

Naturally, this smelled... fishy. Oddly convenient for the international cabal of elites Epstein was linked to, there was no surveillance video from his death. And a top forensic pathologist said he believes Epstein's injuries were more consistent with homicidal strangulation than suicide by hanging.

Rusted Spoke's operations manager told the Detroit Free Press that it's all in good fun.

"We had people that once I posted it on Facebook got in their car and actually drove here for it, so I thought that was fun," she said. "It has increased the sales, of course. It doesn't matter who you are, people think it's funny."

What isn't funny is that the rich enjoy a separate justice system than the rest of us. More than a decade ago, Epstein mysteriously scored an exceedingly lenient plea deal from Trump's former secretary of labor and then-U.S. Attorney for the Southern District of Florida, Alexander Acosta — "the deal of a lifetime," the Miami Herald wrote in a bombshell report — in his conviction for sexually abusing girls.

Acosta resigned from Trump's cabinet earlier this year due to his connection to the case.