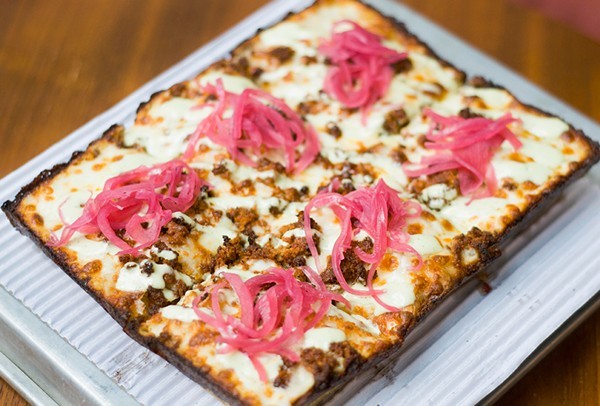 Detroit-style pizza and its square, deep-dish charm continues to rise in popularity across the country. As part of that movement, a new Detroit-style pizzeria opened in Corktown on Wednesday.

The new eatery, Michigan & Trumbull, is located in a refurbished garage at 1441 W. Elizabeth St., next to McShane's. It’s named after a major intersection nearby that has a celebrated baseball backstory, as it was once the location of the old Tiger Stadium.

Related The secret is out about Detroit-style pizza — but is that a bad thing?

The secret is out about Detroit-style pizza — but is that a bad thing?
By Jerilyn Jordan
Flavor
Michigan & Trumbull is run by married duo Kristen Calverley and Nate Peck, who both hail from metro Detroit. The married duo first started serving Detroit-style pizza together in Pittsburgh, after they encountered a dearth of the pizza style in the area. Their first venture was in a Pittsburgh food hall run by the Galley group, a company which later hosted them in Detroit’s Fort Street Galley starting in July. "The response has been overwhelmingly positive in Pittsburgh, people are disappointed to see us go," Calverley previously told Metro Times. "I think initially it was tough convincing people that the pizzas — particularly the signature caramelized cheese crust — was not 'burnt,' but eventually it caught on. I think it's helped a lot that Detroit-style pizza is everywhere now and extremely on trend."

This could be your last chance to try Detroit-style pizza purveyor Michigan & Trumbull for a while
By Jane Slaughter
Restaurant reviews
The menu offers a selection of Detroit-themed pizzas, including the Woodward, the Vernor Vegan, and the Packard Pepperoni. The pizza menu also boasts another vegan option as well as a Buffalo Chicken option. Pizzas are made with either red or white sauce, and all can be made gluten free upon request for an extra dollar. Everything is made in-house, including the sauces, dough, pickled veggies, and sausage.

"A point of pride for Calverley is in the Woodward White, a white pizza with mozzarella, baked ricotta, garlic oil, lemon zest, and red pepper flakes, while she says her husband enjoys the couple's Bagley Chorizo, which boasts housemade chorizo, cilantro ranch, and pickled red onions," MT previously reported.

Also being served up are fried calzones (“Boblo Boats”), salads, and roasted sides, including charred broccolini, spicy eggplant, spiced carrots served with goat cheese and honey, street corn, wings, waffle fries, and fried onion petals. Every item on the menu is priced affordably between $7 and $15.

The owners aim for the new digs to look "like a neighborhood pizzeria that had been closed for years and then we opened it and dusted everything off," Calverley previously told MT. To achieve that aesthetic, they've used wood from Woodward Throwbacks and used tile from Construction Junction.
The eatery seats 65, and is open 11:30 a.m.-10 p.m. Mondays, 11:30 a.m.-10 p.m. Wednesday through Saturday, and 3-10 p.m. on Sundays. (Michigan & Trumbull is closed on Tuesdays.) There are plans on extending the hours by the end of the week, when the restaurant anticipates having its liquor license.

Michigan & Trumbull is located at 1441 W. Elizabeth St., Detroit; 248-376-7410; michiganandtrumbull.pizza.
So many restaurants, so little time. Sign up for our weekly food newsletter delivered every Friday morning for the latest Detroit dining news.