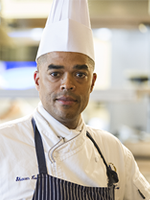 When NBA players began complaining on social media about the poor quality of the food in the pro basketball league's coronavirus isolation zone "bubble" in Orlando, officials called in a Detroit chef to help kick it up a few notches.

Enter certified-Master Chef Shawn Loving, the department chair of Schoolcraft College’s Culinary Arts program. Loving was originally supposed to cook for athletes in Tokyo for the 2020 Summer Olympics, but those plans were scrapped when the event was canceled due to the coronavirus.

After the league called, Loving moved down to Orlando last month and "basically started a restaurant from scratch," The Detroit Free Press reports, cooking more than 120 meals per day for the teams (which does not include the Detroit Pistons).

"It's a lot of movin' and groovin' man but proud to do it," Loving told the paper. "We've hit a stride and we're in great shape."

The Freep reports that Loving used to run Loving Spoonful in Farmington Hills, which led to him becoming Detroit Pistons player Rip Hamilton's personal chef in the early 2000s. That led to Loving cooking for other Pistons, and eventually the NBA and other basketball-related ventures.

Loving tells the paper about other aspects of what it's like to live in a "bubble," like strict safety protocols. He plans on returning to Schoolcraft at the end of August.