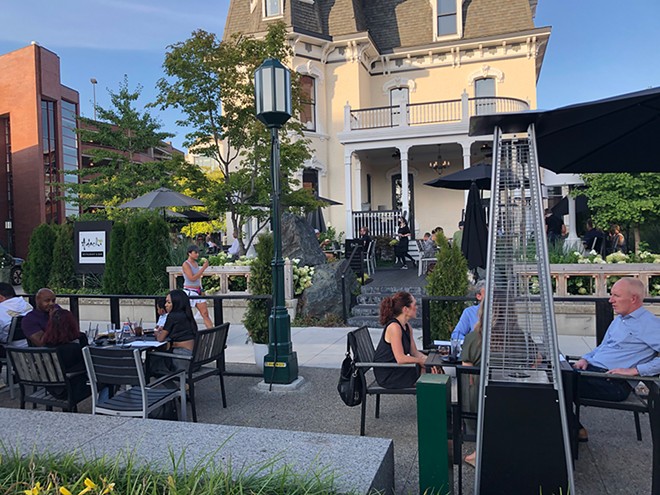 At least six front of house employees of Birmingham sushi restaurant Adachi have tested positive for COVID-19 in recent weeks, while another two are experiencing infection symptoms.

Videos shot by a former employee in June and reviewed by Metro Times confirm some of the allegations — they show the restaurant filled with large parties and patrons crowded in a bar area with no social distancing and masks.

The outbreak comes after Adachi co-owner Kenny Koza in May told employees concerned about safely returning that they had “been watching too much CNN” and wouldn’t get sick, says former employee Justin Haug.

Haug and another employee who raised concerns about the issues in June say they were fired for doing so and have filed complaints with MiOSHA and the National Labor Relations Board.

Several current and former Adachi employees declined to comment, and some agreed to speak without using their name for fear of retaliation. They expressed frustration with what they described as ownership’s disregard for patrons’ and staff’s health. Haug labeled management and ownership “negligent.”

“They made it feel pretty apparent that they were more concerned about the bottom line than employees’ health,” he adds.

Kraus says he doesn’t know how many employees currently have COVID-19, but added that it’s not management’s fault they’ve become infected. He pinned blame on sick employees and guests who have gone to Adachi when they should have stayed home.

“They didn't get sick because ownership and management didn’t do everything they could, they got sick because a person to the left or right of them didn't take this serious enough,” Kraus says.

He highlighted measures that the restaurant has taken like installing plexiglass at the bar and sushi bar, and putting up signage that states that masks are required. The restaurant is continuing to learn and adjust just like other restaurants businesses, Kraus says.

Several staff said multiple complaints have been filed with the Oakland County Health Department, however it’s unclear what kind of action the department has taken. An OCHD spokesperson did not respond to multiple requests for comment. Instead, in a highly unusual move for a regulatory agency, the OCHD alerted the restaurant that Metro Times was working on a story about the outbreak.

An employee who reported the restaurant to the OCHD says that the agency did a surprise inspection, but did it around 5 p.m. when there were few guests at the restaurant.

Adachi’s outbreak appears to be the largest reported at a metro Detroit restaurant since the region’s eateries were given permission to re-open in limited capacity in early June. Several others have temporarily closed over coronavirus concerns, but none have seen this many staff members sickened. Several outbreaks linked to an East Lansing bar in June infected hundreds.


In a highly unusual move for a regulatory agency, the Oakland County Health Department alerted Adachi that Metro Times was working on a story about the outbreak at the restaurant. tweet this
Adachi opened in 2018 in downtown Birmingham’s Ford-Peabody mansion. Its current ownership group includes developer Clint Monsour and Koza, who owns multiple hotels. The restaurant has been busier than ever, according to former employees, because it expanded its patio seating and hasn’t shortened hours like most other downtown Birmingham restaurants.

Management recently closed Adachi when the first cases were confirmed, but it has otherwise remained opened, even as more cases have been identified, according to staff.

Haug and another former employee have hired an attorney to handle a second complaint they plan to file with the NLRB. According to Haug, Adachi reopened on June 8, at which time it didn’t require employees to get COVID-19 tests. He also says Koza downplayed COVID-19’s threat in a May staff Zoom meeting in which he made the CNN comment.

“That was just another red flag and not something that was making me feel like I wasn’t going back to the safest work environment,” Haug says.

Several days after the restaurant reopened, it started to rain while diners were on the patio. Ownership moved everyone inside, and pulled extra tables out of storage to accommodate the crowd, Haug says. He also alleges that an owner had been moving from table to table and talking with guests without a mask.

Haug says he told a manager several days later that he didn’t feel safe working in that environment. The manager asked him what changes could be made, and Haug offered a list of suggestions. Haug says he was taken off the schedule several days after that.

Haug and other employees had also participated in a May 12 Zoom meeting with labor attorney Tony Paris, who is representing Haug. Paris tells Metro Times that Haug was fired in retaliation for shooting the video, talking with other employees about the issues, and raising his safety concerns with management. Those activities are protected by the National Labor Relations Act, Paris says, and will be the crux of the second NLRB complaint.

Kraus had a different take.

“Nobody was fired — they quit,” he said. “Their goal was self-protection.”

Paris says Haug may also be protected by Gov. Gretchen Whitmer’s emergency order that allows those who “have a reasonable belief that the workplace is unsafe or not in compliance with state or federal law” to not go to work without retaliation from their employer.

Paris said it’s clear that Adachi had become “unsafe” and “whatever lip service given to following CDC guidelines and plans for requiring masks had been completely abandoned” as soon as it started raining.

“Once a restaurant gets going and people need to be served food, all those plans go out the door — you just know it,” Paris said.

However, that incident occurred long before the recent spate of infections, and servers in recent weeks may have exposed hundreds of diners to COVID-19. In the event that servers are infected, those who are dining on patios are less likely than those inside to contract the virus, says Dr. Teena Chopra, an infectious-disease professor at Wayne State University. But she adds that it’s still possible for outdoor diners who aren’t wearing masks or who touch contaminated surfaces to become infected.

“If there’s a concern for an outbreak, then they should shut down and make sure everything is disinfected and in place, then re-open in a very cautious manner,” Chopra adds.

The OCHD issued a statement after publication. Bill Mullan, the department's communication officer, said the OCHD first seeks to assist restaurants in being compliant with regulations and only shuts them down as a last resort.

"We’re ensuring that [Adachi is] in compliance with all health orders and they definitely have responded positively and are working to ensure the safety of their employees and customers," Mullan said.