Quarantino's, a Detroit-style pizza cooked up during quarantine, emerges in Grand Rapids 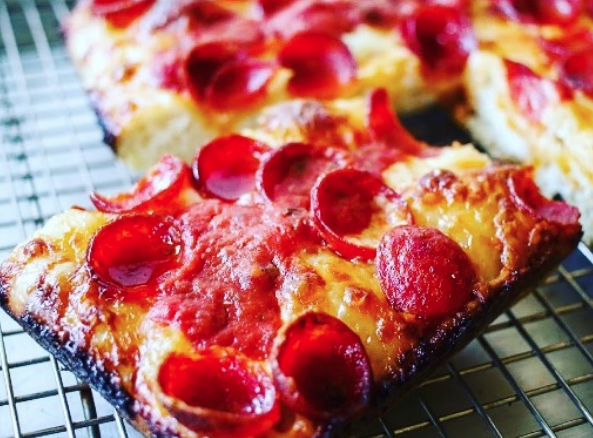 Joel Wabeke never experienced the square-shaped joy that is Detroit-style pizza until he came over to this side of the state a few years ago from Grand Rapids to help out at Wright & Company. After tasting Loui's and Buddy's, he was in love.

"It's a great style," he says. "It's like American-Sicilian."

He began to notice other places around the world doing their own takes on Detroit-style pie, like the punk rock-themed Descendant in Toronto and a place aptly named Party Store in London.

"I was like, wow, you can go outside of the normal box with this style," he says.

About four years ago, Wabeke opened a cafe called That Early Bird in Grand Rapids, and later a spot called the Littlebird downtown. When he ran out of space, he acquired a former doughnut shop across the street from Early Bird for more kitchen and office space.

But when the coronavirus pandemic came to Michigan, both spots took a hit due to dine-in restaurants being forced to first close and then reopen with lower capacity limits. That's when Wabeke got the idea to pivot to takeout pizza.

Wabeke says he started working on recipes about two months into the pandemic. Quarantino's opened its doors a little more than three months ago.

"When I said I was going to name it 'Quarantino's' people thought I was joking," he says.

But Wabeke's pie stands on its own. For his take, Wabeke says he uses a little more dough than what he's seen at Buddy's or other places. He places the brick cheese around the edges and slices his mozzarella on the chunky side, so it melts a bit more slowly, achieving a good ratio of crispy and gooey.

Wabeke's pies are as irreverently named as Quarantino's, with nods to Detroit like the "MC5," a pepperoni pizza, and "It's All Greektown to Me," which has kalamata olives, spinach, artichoke hearts, and feta cheese. Quarantino's also has a wide vegan menu, with Daiya vegan cheese and vegan sausage.

"We try to keep it fun," he says. "We're doing a lot of the dorky stuff that like we think of in the kitchen that we'd never put on the menu of a restaurant that's a little bit more about fine dining. ... I'm just trying to like give people that pizza experience that they crave in a different way."

Wabeke says so far business has been good, and many weekends they sell out. He recently ordered more pans to accomodate more customers.

For now, Wabeke says he's just trying to get his restaurants to survive through the winter. He says he'd like to keep doing pizza, but maybe by transforming the space into a bar with a fuller menu.

But the name, while funny, probably won't stick.

"I look forward to the day when we can rename it," he says.