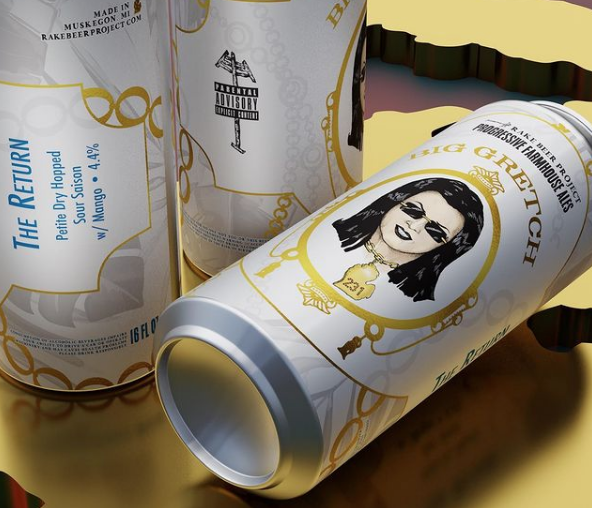 Muskegon brewery Rake Beer Project is showing its support for Gov. Gretchen Whitmer with a second installment of signature cans and a new flavor.

"Big Gretch: The Return" will feature a petite sour saison and a can that features the governor wearing a Detroit-signature pair of Cartier sunglasses as made famous by Detroit rapper Gmac Cash.

The new flavor is a follow up to a hard seltzer that the company released last May in support of Whitmer's pandemic stay-at-home order and as a snarky pushback to Republican legislators who called the lifesaving orders a "power grab."

“(We’re supporting) the fact that she is making the tough decision to do this when there is so much pressure on her to not take any action,” owner and brewmaster Josh Rake told MLive.

“Until this pandemic is brought under control, and we can put this thing behind us, being open is not the answer, for me at least. Even if we’re open at 50 percent, it’s not a long-term, viable thing.”

Rake Beer Project has also struggled amid the coronavirus pandemic. Like other restaurants, the tap room has had to cut its indoor service due to health restrictions.

Still, Rake said that he knows of other Muskegon business owners who support the governor’s restrictions.

He also got a lot of calls of support from customers. “We were really amazed by the response to the first drop of Big Gretch,” he told MLive. “(It) kind of blew up and took on a life of its own. We sold out the entire batch in just minutes.”

Rake also got a call from Whitmer and said he was on the line with her when she cracked her first can.

Big Gretch: The Return is available for pre-order beginning at 6 p.m. on Tuesday, Dec. 1. A four-pack retails for $18. Given the original consumer interest, Rake has brewed three times as much of the light dry hop version than the seltzer.

The beer will feature the same popular logo of Whitmer wearing Buffs, a gold chain with Michigan’s emblematic mitten image, and the Muskegon area code, 231.