Baobab Fare, a new restaurant run by a pair of refugees from Burundi that will be serving up East African flavors in Detroit's New Center area, is finally getting ready to open its doors with a few soft opening events this week.

First reported by Metro Times in 2017, Baobab Fare co-owners and married couple Hamissi Mamba and Nadia Nijimbere initially hoped to open their restaurant in 2020, but the pandemic delayed those plans.

Mamba tells Metro Times that they came up with the idea to open an East African restaurant soon after arriving here, while receiving support from Detroit Freedom House.

"We didn't see any East African restaurants around here," he says. "And so that is how the idea started."

Plus, there were other considerations.

"It was hard to get a job in Detroit," Mamba says. "We didn't have asylum, and we were trying to see how we can stay here. So we [said], let's try it out. Either we go to school or start business."

Mamba had just completed an entrepreneurial training program with Southwest Solution's ProsperUS. Eventually, the couple got asylum, and months later, they won the Hatch Detroit contest for entrepreneurs, which awarded them $50,000. Mamba said the early press they got from Metro Times helped them get votes for the contest.

"We didn't know anybody around here," Mamba says. "We [had] nothing, to be honest."

Winning the contest helped them get much-needed aid, including legal support, marketing help, and advice. The nonprofit Midtown Detroit, Inc. helped secure them space in the New Center area, where they will join other restaurants, including YumVillage Afro-Caribbean Market Pantry, as well as a forthcoming second location for Eastern Market fave Supino Pizzeria and Joe Louis Southern Kitchen. 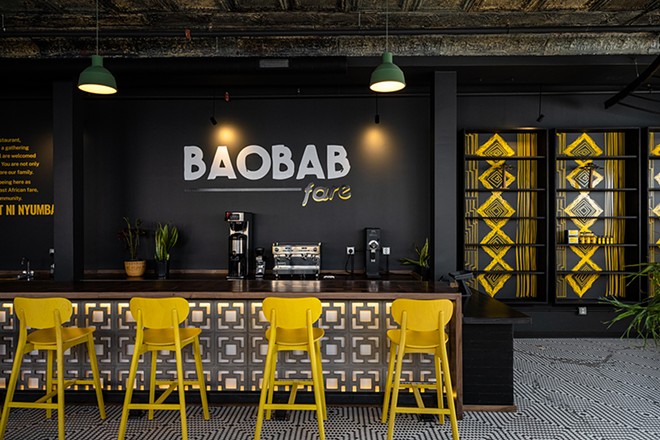 Mamba says the space was formerly a pharmacy and a beauty supply store before becoming long-vacant. When another restaurant that planned to move into the space backed out, they "jumped at the opportunity" to take it, he says. Midtown Detroit, Inc. owns the building, and didn't charge them rent while the restaurant got delayed through the pandemic, for which Mamba is grateful.

Baobab Fare has also announced a new line of Ji passion fruit juice and Pili hot sauce along. They have also been importing and roasting coffee beans from Burundi, which is known for its coffee.

The restaurant will celebrate with a soft opening on Saturday, Feb. 13 with limited seatings at 4-6 p.m. and 7-9 p.m. Tickets are available for $60 dollars here, which gets guests a four-course meal with dessert.

The soft opening events are expected to continue Monday, Wednesday, and Friday the following week, and Baobab Fare expects to start offering takeout starting on Monday, Feb. 22. It will be closed for general indoor dining until its grand opening later this year.

"We're going to take things slowly to see what people like, what they don't like," he says.