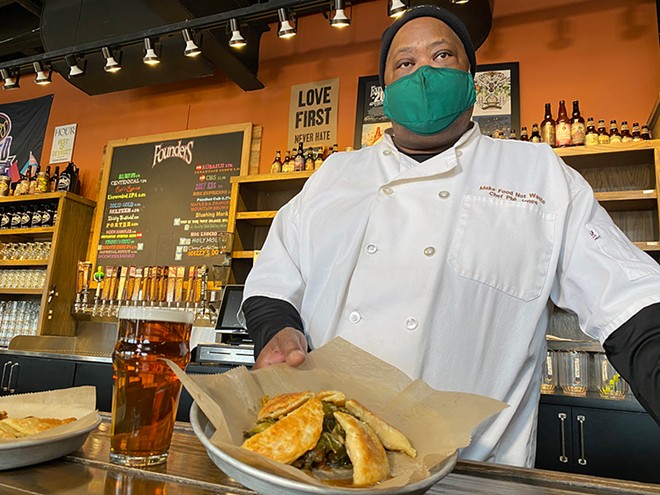 Founders Brewing Co. is continuing its efforts to engage with the Black community following a contentious racial discrimination lawsuit — this time by honoring a Detroit chef for a special Black History Month collaboration.

That chef is Phil Jones, a longtime chef and activist who has made social justice issues a tenet of his work. He says when the opportunity to work with Founders presented itself, he couldn't turn it down if it meant he could leverage it to further his social justice work in Detroit.

"Since [the lawsuit] there has been movement on the Founders side to actually address some of those issues and reach out to the Black community," Jones tells Metro Times. "We're in a very fractured state of being here in the United States, and I had to make a personal debate — whether I allow this moment to pass without engaging Founders, or do I engage clear-eyed with an understanding that I have expectations with this engagement?"

For the collaboration, Jones has developed two unique fusion menu items for the Grand Rapids-based brewery's Detroit taproom that he says tell stories about Detroit's Black history by remixing dishes and ingredients from different cultures.

The first item, the "Black Bottom and Poletown Sweet Potato Pierogi," was offered at the beginning of the month and remains on the menu through the end of this week. Jones says the dish pays homage to two of Detroit's ethnic neighborhoods that were destroyed: the African American enclave of Black Bottom, demolished to make way for the Chrysler Freeway, and Poletown, the Polish community in Detroit near Hamtramck that was razed for a General Motors factory.

Jones says he "Africanized" the traditional Polish dish by adding sweet potatoes and collard greens. He describes the collard greens as "the redemption portion of the story" — he developed the dish years ago for the annual Harvest Festival celebrated by D-Town Farm, a seven-acre organic community farm that sells produce grown by Detroiters for Detroiters. The greens were added the Founders dish "unapologetically to highlight our need for food sovereignty," he says. 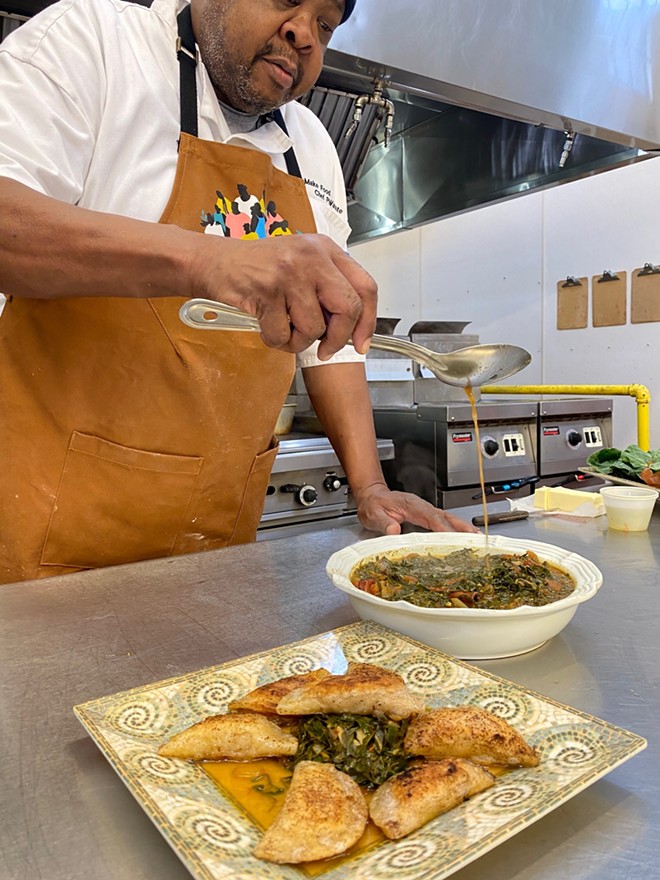 Jones points out the sad irony that both Motor City neighborhoods were destroyed for the automobiles that would only help people to flee Detroit for the suburbs in the 20th century.

"We talk about progress, but who's the progress for?" Jones says of the demolitions. "You put it in an expressway that makes it easier to leave the city. And so are we really moving forward? Are we all moving forward, or are we just moving out?"

Jones was initially tapped for just the one dish to be offered for one week, but Founders decided to extend the collaboration through the entire month. He then developed a second menu item, the "Motor City Shrimp and Grits," which will run the last two weeks of February, and honors the Black youth who helped revitalize Detroit's then-sleepy Greektown neighborhood by making it their hangout. Jones took the traditional Black dish and added Greek ingredients, including tomato, olive, and feta cheese.

"Greektown was dying, but Black teens revitalized it in the '70s and '80s," he says. "Black teens made Greektown viable. We don't ever hear that contribution, that story."

Jones would know. His culinary career took off in Greektown after he was hired to help open Fishbone's in the '80s. After growing up in St. Croix in the Virgin Islands, where he started cooking at age 6, Jones moved to the Detroit area around age 10 with his family. As an adult, he had planned to get into the family business of cosmetology stores before he saw a sign at Fishbone's looking for help. He never looked back.

Other career milestones include a stint running the Silver Spoon carryout restaurant in Grosse Pointe Woods, catering at the Edsel & Eleanor Ford House, serving as executive chef at the former Lola's in Harmonie Park, and developing recipes for the fast-casual soup chain Zoup!

But Jones also comes to with a career full of social justice bonafides, including working with the Restaurant Opportunities Center's COLORS restaurant, which trains workers to enter the food-service industry. He's also one of the people behind Make Food, Not Waste, an annual event where chefs prepare dishes from food that would otherwise be thrown away, given away for free to people in need.

Founders found itself thrust in the national spotlight in 2019 after details of a racial discrimination lawsuit emerged from a worker who alleged a "racist internal corporate culture" at the company. There was a boycott, and Founders temporarily closed its Detroit taproom. After settling the lawsuit, Founders reopened the taproom last year, promising to do better. That included diversity and inclusion efforts like training and hiring formerly incarcerated Detroiters, a pledge to donate profits to local charities, and other ways to engage the Black community.

While some might give Founders the side-eye, Jones says it was important for him to take the brewery's efforts in good faith. He also says he saw it as an opportunity to hopefully take that goodwill to develop a mutually beneficial relationship.

"It's easy to take people and throw them away and discard them, but at the end of the day, what do we have left?" Jones says.

He adds, "My thinking was Founders is not going to just close up shop, sell the building, and leave it sitting there abandoned. They're going to keep moving forward. And the choice to engage them is [a way] for me to see what someone's doing. I think that for us to move forward, we need for people to be held accountable, but we need to be around to see that they're doing it. You know — is it sincere? Is it the right thing for the community? We can't do that from a distance."

Jones says his hope is for his relationship with Founders to last beyond Black History Month. He also says he's trying to get access to Founders' spent grain, a byproduct of the brewing process that can be used in other dishes. Not only could it help curb waste, but Jones thinks it could also be a revenue-builder for his organization. Jones also says he's in talks with Founders to develop discussion forums at the Detroit taproom, which would be available to the public to discuss racial issues over a round of beer and food.

"We need to have intimate conversations that are looking to edify folks," he says, "as opposed to just vilify." (Founders did not respond to a request for comment.)

Plus, as Jones points out, the Detroit taproom is perhaps an appropriate place for these discussions. Before it was long-abandoned and before Founders acquired it, it was home to the Cass Corridor Food Co-op, a Black-led food co-op that helped bring healthy food into the neighborhood.

That's similar to what Jones aims to do with a new venture called Farmacy Food. The project involves a prepared meal program with a focus on ethnic flavors and improving nutrition in the community. Jones says the goal is to make the kits as affordable as possible at around $12 each, with discounts for seniors, students, the homeless, and veterans eligible for a 40% discount — making the meals competitive with unhealthy but cheap fast food. Jones also envisions Farmacy Food setting up "smart fridges" in communities, where people could purchase healthy food by swiping their debit or credit cards.

While it may seem like Jones has many different irons in the fire, to him, it's all part of the same mission.

"I always say it looks like [I'm involved in] a lot of things, but it's all only just one thing," Jones says. "For me, it's good food."