Customers at the Midtown Whole Foods were told to immediately leave without explanation on Tuesday and the store was shut down early after a large number of its employees tested positive for the coronavirus.

"Upon being informed of positive cases at Whole Foods, the Detroit Health Department team acted immediately to address this outbreak by offering rapid testing to all employees," Fair says in an email to Metro Times. "So far, 23 employees out of 196 have tested positive. We have received a commitment from Whole Foods that no workers or close contacts of any employee who has tested positive will be allowed back to work until they have produced a negative test result."

The company confirmed to Metro Times that it has since carried out a deep cleaning of the store.

"The safety of our Team Members and customers remains our top priority, which is why we address any confirmed diagnosis in our stores with a comprehensive action plan that includes enhanced cleaning and contact tracing, as well as communicating directly with our Team Members," a company spokesperson said in a statement. "We support any Team Member who is diagnosed positive or placed in quarantine so they can prioritize their health and stay home. We have rolled out extensive measures to keep people safe in our stores and are diligently following all guidance from local health and food safety authorities."

According to an employee who spoke on the condition of anonymity out of fear for retaliation, the surprise shutdown came around 7 p.m. on Tuesday, at the tail end of the usual afternoon rush. The previous weekend, employees got a large number of automatic text message notifications informing them that fellow employees had tested positive.

"[We] were getting so many text messages over the weekend that [we] thought it was spam, that they didn't know what it was," the employee says.

The situation got so bad that on Tuesday that during store hours, the company quietly asked employees to leave work to get a rapid test at a nearby testing facility, before abruptly deciding to close the store down for a deep cleaning.

Enough employees were sent home after testing positive that an employee says the store seemed "like a ghost town" on Wednesday, causing customers to ask what was going on. 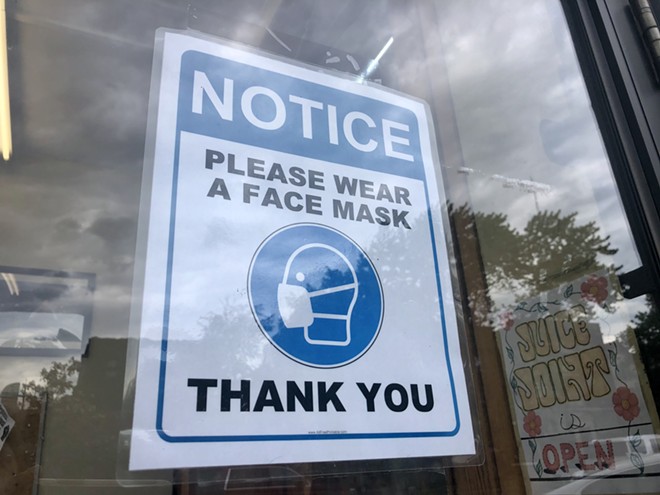 While the store does have signs asking customers to wear a mask before entering, the employee says enforcement is lax and the store, the only Whole Foods in Detroit, is frequently crowded, which makes it "extremely hard to social distance."

"It's very hard to stay six feet away from anyone at any time, much less for the whole eight hours that we're there," the employee says.

"We have a security guard, but there's still a lot of people who do improper mask-wearing or who want to talk on their phone [while] walking around the store, or eat food in the store without their mask."

To make matters worse, the employee says customers are often rude to employees.

"We get yelled at almost every single day by people in the store, especially as employees who test positive are sent home," the employee says.

The tipster says Whole Foods employees are not required to get tested regularly. They also say that even though the city is moving to help them get vaccinated, many employees aren't yet. Plus, the employee says they feel a vaccine does little to help them feel safer at the job, and still worries about possibly spreading COVID-19 to their roommates.

"I understand that even with someone being fully vaccinated, they can still get sick," the employee says. "You could still experience symptoms and you can still give it to someone else. Even when I'm fully vaccinated, I'll still be afraid that somehow I could get COVID."

There have also been news of coronavirus outbreaks at processing facilties for Amazon, the home delivery giant that owns Whole Foods. In October, the company revealed that nearly 20,000 of its workers had tested positive for the coronavirus.

Amazon owner Jeff Bezos's wealth has grown by more than $70 billion over the course of the pandemic. Bezos is the world's wealthiest person with a net worth of about $180 billion.

"I feel that this is a flaw in the system from the top down," the employee says. "I feel like Amazon and Whole Foods, they're the type of very large corporation where they should do more to protect workers."