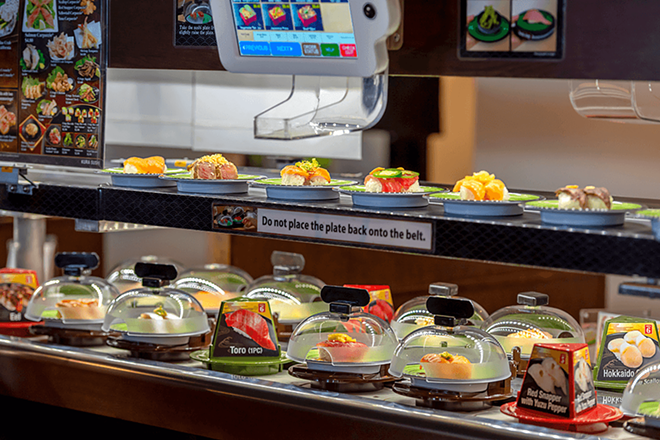 A sushi train restaurant has made its way to metro Detroit.

Kura Sushi is a Japanese chain in the style of the country's popular "sushi trains," where plates of sushi are delivered to customers via conveyor belts.

The restaurant is set to open Saturday in Troy.

A spokeswoman says that to the best of the company's knowledge, Kura Sushi the only conveyor belt sushi restaurant in Michigan. (There used to be Sushi Nara in Ann Arbor, but that has since closed.)

Here's how it works: Below, a "primary belt" carries a rotating selection of sushi plates that customers can grab as they please. Guests can also place orders using a touch panel tablet at their table, which is delivered via an "Express Belt" — or what Kura Sushi calls a "sushi highway" — located above the primary belt.

The bill is calculated based on the special orders and the number of plates taken from the primary belt.

The spokeswoman says the company has a number of safety measures in place to mitigate the coronavirus pandemic. Beyond the conveyor belts, which limit interactions between customers and employees, the restaurant will have a 25% capacity limit, per state orders. Plexiglass panels have been installed between booths, which will be disinfected between customers.

The plates on the primary belt are also covered by the company's "Mr. Fresh" ventilated sushi lid, which the spokeswoman says limits airborne exposure and has plate-tracking technology that monitors how long the item has been circulating.

The restaurant will also be open for carryout and delivery.

The first Kura Sushi restaurant opened in Japan in 1977 by Kunihiko Tanaka, originally as a takeout spot. In 1984, Tanaka opened the first Kura Revolving Sushi Bar in Osaka after using his mechanical background to design and build what he thought would be a more efficient sushi restaurant.

Kura Sushi expanded into the U.S. starting in 2008. The Troy spot is its first in Michigan and 30th in the U.S. The chain has more than 540 locations around the world.

Updated Wednesday, March 10: This story was updated with information on Sushia Nara, a former conveyor sushi spot in Ann Arbor.