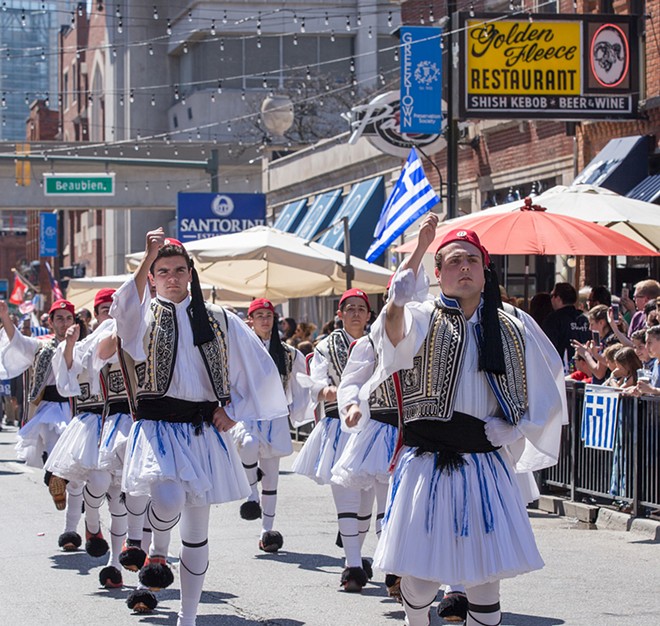 On any given Saturday night, pre-pandemic, you could walk down Monroe Street in Detroit and hear the sounds of traditional music playing over speakers, seeing tattered Greek flag banners hanging from glistening lights. You could smell gyros and souvlaki and hear the old language spoken in the streets and the restaurants. As Greece celebrates 200 years of freedom from the Ottoman empire on Thursday, Detroit can reflect on how Greek immigrants helped shape the city and make Greek culture synonymous with Detroit.

Before the intersection of Monroe and St. Antoine was home to Michigan’s Greek populace, it housed German immigrants who used the area as strictly residential housing. In 1886, the first recorded Greek immigrant, Theodore Gerasimos, arrived in Detroit. In 1900 the first Greek cafe, or Caffenio, opened up on Macomb Street.

Mass migrations came between 1911 and 1917 due to the persecution of Greeks. It’s recorded that the majority of the Greek immigrants came from the peninsula Peloponnese. However, immigrants also came from the islands, Xios, Crete, Ikaria, Mani, and others.

Stavros K. Frangos, the author of Greeks in Michigan, writes that “While no other reliable statistics are available, certainly Greeks from the three islands of Chios, Crete, and Cyprus have always made up a sizable element of the community.”

However, Henry Ford offering factory workers $5 a day wages ensured the Greek community, like others in Detroit, would continue to grow.

By the second World War, Monore was transformed from German immigrant’s residential housing to a bustling community of Greek residents. Their cathedral, businesses, and society intersected with the Detroit lifestyle.

The influx of immigrants lent themselves to work as merchants, with their living quarters above the store, barbers and hairstylists, restaurant owners, and day laborers — bringing Greek culture to Detroit, and offering delicacies born from the convergence of Middle Eastern and Mediterranean cuisine.

By the 1960s, what came to be known as Greektown was populated with immigrants and their growing families, which led to Greek societies like AHEPA, Sons of Pericles, Daughters of Athena, and the Pan-Ikarian Brotherhood. With these societies’ roots in the Orthodox church, the groups practiced acts of charity, promoted unity amongst the Hellenic community, advocated for civil rights, provided mutual-aid, and extended what’s known as “Philoptimos” — hospitality and generosity.

Through their dedication to maintaining a welcoming block, Detroiters embraced the Greek culture. The Athens Bar became a hangout spot for Detroit cops to eat lunch, cash their checks, and play a round of pool. Grecian Gardens was known as the businessman’s bar, and the Laikon was the late-night spot for Greek coffee and mezethes after a dance or a night on the town.

Greek immigrants brought with them determination and ingenuity as well. The daughter of Greek immigrants, in 1970 Olga Loizon became the first woman to receive a business loan from the Detroit Bank and Trust, receiving $3,000. She opened the first Olga’s Kitchen in Birmingham’s Continental Market, which went on to become a regional chain. Loizon was embraced by the community and remained successful, and was an icon until her death in 2019.

Throughout the years, Greektown stood as a distinct entity from Detroit itself. With Annunciation Orthodox Cathedral being the entranceway to the neighborhood, it was apparent that Detroiters wished to participate in Greek culture-lining the streets on Orthodox Good Friday to watch as Greeks parade down the street while Detroiters flock to Monroe to watch the spectacle, taking videos and pictures.

On Greek Independence Day, Detroiters would embrace their Hellenic neighbors in joy as the community celebrated freedom from oppression in the old country and opportunity in their new home.

“The Hellenic society has been part of the foundation of today’s Detroit culture,” says Yianni Dionsiopolous, the owner of The Golden Fleece, Exodus Nightclub, Bakalikon, local Greektown historian, and former Greek School teacher. “Counting over 100 years, the Hellenes that came to Detroit were pioneers to a few Detroit staples, one of them being, of course, the Greek community center of Greektown. One of the first sports bars was established by Greeks, the infamous Coney Islands, leaders in the city ethnic events, even improvements to the Ambassador Bridge and the casinos were brought to this city by Greeks. Those are just a few examples of the contributions.”

Even during these times of stress and turmoil, the Hellenic community has continued to uplift the city and provide comfort for the citizens. Dionsiopolous says this concerning how Greektown has continued to thrive under the pandemic.

“One thing is for sure that during these unprecedented times that the few Greek family-owned businesses once again adapted and orchestrated to maintain and keep the district ‘alive’ and bring down all Detroiters when the majority of the city was closed,” Dionsiopolous says.

Looking to the future, Greektown is re-building itself and ensuring its legacy and vibrancy continue. Detroit’s pride comes not only from its history with the industry and social achievements but the migrant communities that helped build the city and continue to aid in the city’s growth.

Dionsiopolous thanks Detroit for embracing the Hellenic community and giving him the opportunity to share his culture and traditions with its people.

“Detroit, from its essence and name, is a center of multi-ethnic groups and cultures,” he says. “As we have seen with a lot of other ethnic groups, the Greeks are one of the few that have remained active and vibrant all these years through Greektown, festivals, parades, etc. This just proves that the city embracing the Greek community from the beginning has led to various achievements in a lot of fields. Fully understanding this sets the example for everyone else. On behalf of Greektown and the Greek community of Detroit, we thank you for all the support and are looking forward to the next upcoming decades in this beautiful city called Detroit. Yia mas!”

The history of Detroit’s Greek community is on display through Greektown and in the Hellenic Museum, where preserved records are on display and artifacts from the earliest days of Greek immigration and modern stories meet. The Hellenic Museum is located at 67 E. Kirby St., Detroit; 313-871-4100; hellenicmi.org.