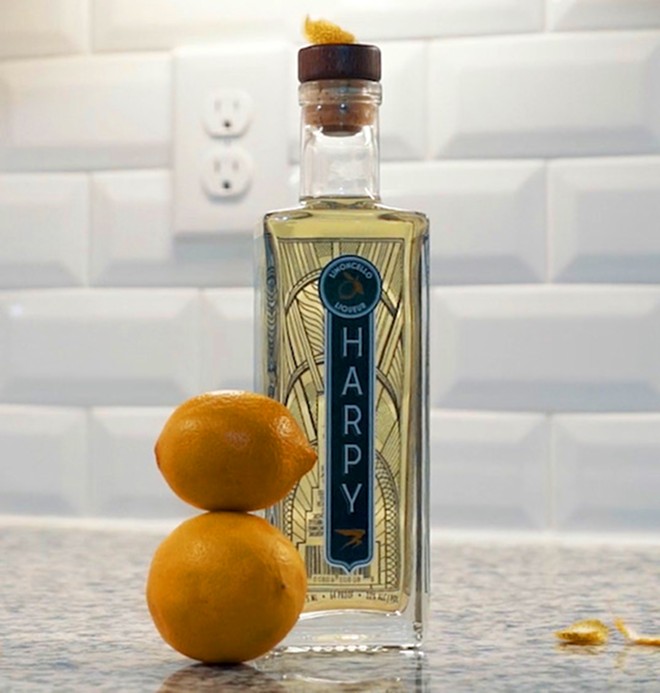 Lauren Facca of Bloomfield Hills says that her "big Italian family" has enjoyed homemade limoncello, an alcoholic lemon-flavored drink, as holiday tradition ever since she can remember. The recipe, she says, was passed down from her grandparents.

"Every family sort of has like their own way of doing it, sort of like, you know, making meatballs or pasta sauce," she tells Metro Times. "With my grandparents being immigrants, it was always something really important to them."

Around her 21st birthday, Facca says she got the idea to continue the tradition. A biomedical student at Oakland University, in 2019 Facca and her best friend Greg Hagedorn set out to start their own liquor company specializing in limoncello.

Harpy Liquor officially launched this week, with its stylish bottles of limoncello available at local markets including Kakos Fine Wine in Birmingham. Facca says they hope to offer the bottles in local bars and Italian restaurants soon, and have partnered with a national distributor to expand beyond Michigan.

Harpy's limoncello is produced through a deal with Michigrain Distillery in Lansing, but Facca says the production method is close to her family's secret recipe, which calls for using real lemon zest. Facca says she ages hers for longer than most other commercial limoncellos, and uses less sugar, which results in a smoother taste.

"I wanted to not just to have a limoncello that would slam the competition, but to really show people what real limoncello is like," she says. "If you were in Italy, this is what you would get. This is the real deal."

Facca says the stylish bottles are the result of months of planning and "hundreds" of iterations, and have an Art Deco motif that Facca says was meant to evoke Detroit. The label is vertical, like the Fox Theatre marquee, and a design laser-printed on the bottle is inspired by the Guardian Building.

"I really wanted it to be known as a Detroit brand, I really wanted something that would have Detroit vibe," Facca says. "With Greg and I, whenever we're downtown, we just always love all of like the older historical buildings."

The sleek Harpy logo, derived from a half-woman, half-eagle creature from Greek and Roman mythology, resembles a hood ornament on a car.

Facca says the Harpy creature was chosen because she is "very powerful, and amasses more power by eating the souls of men."

"Greg was like, you know, I really think it is applicable secretly, you being 24 years old and being the founder of a liquor brand," Facca says.

"I've always been a very motivated and ambitious individual, and anything that I have an idea for, I really, really try and try and make it happen," Facca says. "I always set out with the goal of hoping to inspire other women, especially in business and entrepreneurship, and encouraging them to pursue their passions and dreams."

While many people drink limoncello as an after-dinner digestif, Facca says she drinks it her own way.

"Especially being younger, I use it very differently than the old school Italians," she says with a laugh. "I would say for my friends and I, it's something that is about the potency of vodka that you can drink like lemonade, served chilled all by itself in a glass, not even with ice. Whether you want to sip on it, have shots of it, use it as like a pregame — it'll definitely give you a very euphoric buzz."

While Harpy has cocktail recipes on its website, "my favorite way to drink it just all by itself," Facca says.

Sign up for our weekly food newsletter delivered every Friday morning for the latest Detroit dining news. Got a tip? Send it to eat@metrotimes.com.