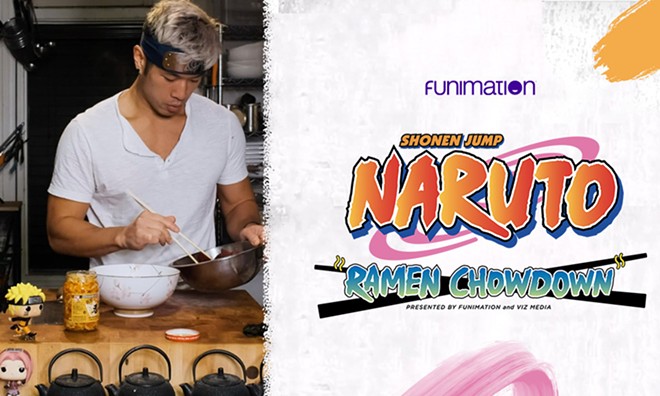 When the pandemic hit, Jonathan Kung — a local chef who has worked with spots like Standby and Gold Cash Gold, as well as doing his own freelance work — found himself with plenty of free time. So like many people stuck at home during the past year, he turned his attention to TikTok.

On @chefjonkung, he started making fanciful dishes based off of characters from animated shows like Avatar and Food Wars!: Shokugeki no Soma, an anime about a culinary school that aired its final season last year. That timing could be why his Food Wars!-inspired videos went viral.

"That seemed to have hit some kind of like niche part of TikTok, and it took off," he tells Metro Times.

The videos caught the eye of American anime distributor Funimation, who approached him with an idea to do a collaboration. They brainstormed ways they could work together and came up with "Naruto Ramen Chowdown," a series of ramen dishes based on the anime Naruto. The five-episode series premiered last month on Funimation's Instagram channel, with new episodes dropping each Friday.

"It's got such a huge core fan base and has such a huge following," Kung says of the decision to highlight Naruto. "It's just so iconic and recognizable that we figured that this would be a good jump-off point." (Plus, the titular character loves ramen.)

Kung says for the Naruto series, Funimation's only major request was that he used ingredients that were easy to find so fans could make the dishes at home.

"[We thought] it would be a really great challenge to make these dishes themed off of characters in the show, but also limit myself to doing things and using things that almost any person, whether they're a good cook or not, can do," Kung says. "Naruto's Miso Ramen" is similar to what the character eats in the show, but with Kung's addition of a Cantonese-style pork shoulder. Other dishes include "Sasuke's Purple Cold Vermicelli Noodle Salad" and "Sakura's Beet and Shoyu Ramen."

Kung says he enjoyed watching anime like Dragon Ball Z while growing up in Hong Kong. "It would be the only time that my dad would let me stay up until 11," he says. He's maintained an interest in anime largely from internet culture. "Dragon Ball Z, Naruto, Sailor Moon, they are very much like cultural icons, and especially on the internet," he says.

The project has kept him busy while the pandemic has put his plans to open a new restaurant in Eastern Market have been put on hold. Playfully named Kung Food, Kung describes the forthcoming restaurant as "a casual noodle and dumpling" spot that will "bring to the public the stuff that I was doing kind of in secret in Detroit for all these years." No target opening date has been set. "I'm not opening a restaurant during a pandemic," he says.

In the meantime, Kung is just glad that the project has helped him keep so many people's attention.

"It's just really nice to know that the things that I've been doing in the city actually has some residents outside of the city, and people outside of the city really connected [with] and thought that it was really cool," he says. "And it's just nice knowing that like something that I was doing here and something that Detroit had managed to like incubate and support within me has just connected with so many people outside of it."