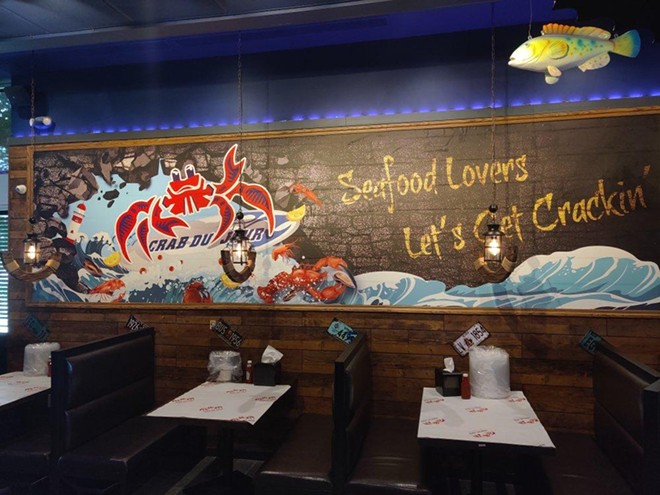 "The concept is pretty much fresh, affordable seafood, in Cajun-style boil bags," Schroth tells Metro Times. "The idea is that you can get this kind of food around the corner from your house. You don't have to drive thousands of miles to go down to the Bayou, to Louisiana, to get this kind of delicious, awesome food." Customers pick their seafood, which is boiled in an oven bag with potatoes, corn, sausage, spices, sauces, and butter.

Schroth says he got a taste for Southern cuisine during his stint in the military. "I used to love when I was down South and I'd get all this Southern food, and then I come back north and I'm like, 'where is it?'" he says. "For me to get some shrimp and grits, I'm just like in heaven, because I can't normally get it up here."

According to Crain's Detroit Business, the Dearborn store will be located in the 8,000-square-foot space that formerly housed Bravo! Italian Kitchen. The company is investing $3 million into the project.

Schroth says the company is known for its Du Jour sauce. "When you're opening that bag, it's like — bam, the smells of the spices hit your face, and it's just like this wow factor," he says. "What I do is I take that extra oil and I marinate my steak with it, or I put it on pasta at home."

He adds that he and one of the company's chefs frequently travel to Louisiana to try new dishes.

"I love it," he says. "I wouldn't be with this company if I didn't love it. And stomach really shows it, because I eat it four or five times a week."

Schroth is cautiously optimistic that the restaurant could open by the end of July.

A number of crab boil restaurants have opened in metro Detroit in recent years. Warren's Detroit Pho & Crab has been serving "Viet-cajun" cuisine, including crab boils, since 2017. Saucey Crab opened its first location in Southfield in 2019, and expanded to a second location in Detroit earlier this year. Cajun Boiling Crab opened in Detroit's west side last year. And Chef Maxcel Hardy is also working on a seafood boil spot called What's Crackin'.