Once a lemonade stand, Bea’s Squeeze is now a thriving lemonade company that is being distributed in 25 different states.

Bea Wolnerman, founder and owner of Bea’s Squeeze, says she didn’t know what to do after college, but she knew she wanted to be an entrepreneur. So she came up with a quirky idea in 2019: a lemonade stand along the Dequindre Cut that uses a bucket and pulley system to lower lemonade down to the trail.

“So it started off as just, you know, this fun summer pop-up that would be a great way to interact with anyone who loves lemonade,” Wolnerman says. “That’s kind of what it was at first, I mean it was awesome. We started gaining a lot of traction, we started participating in local food festivals.”

Despite taking off shortly before the pandemic, Wolnerman says Bea’s Squeeze thrived in the beginning because it wound up being good for social distancing during the pandemic.

“The stand, crazy enough, did really well last year just because of the bucket and pulley system,” Wolnerman says. “Everyone thought we did that on purpose to be like the social distance lemonade stand, which worked out because it was outdoors and it was safe.” 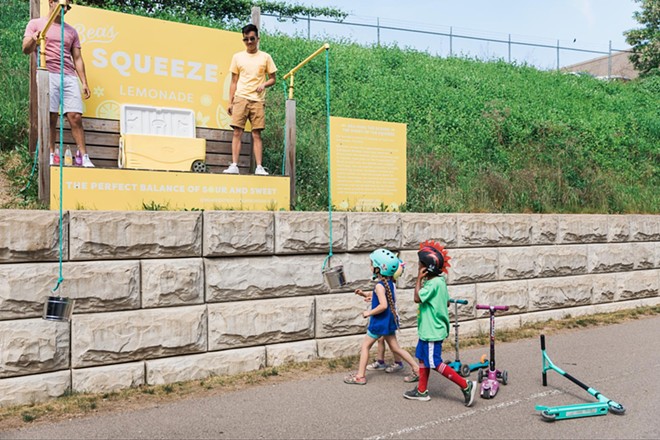 By the end of summer 2020, Bea’s Squeeze was placed in 25 states, stores such as Meijer, Kroger, BJ’s, and in local and independent markets and restaurants.

She says she started own corporate gifting company called Open Me When, and merged with another Detroit company called Standout Solutions, which then led her to Bea’s Detroit.

“I bought this building in 2018, it was a really cool meatpacking building,” Wolnerman says. “Unfortunately, it’d been abandoned for quite a few years, it was in really rough shape. I ended up having to tear down almost the entire building, and then rebuilding from scratch.”

Not only is Bea’s Detroit a cafe, but it’s also a co-working space, a venue for special events, and a retail shop.

The space offers private offices, conference rooms, a lounge, a warehouse, and a rooftop. Bea’s Detroit can also be used for special events such as weddings, showers, birthdays, and more.

“So I thought it was going to be a quick renovation project, I wanted to turn it into like a co-working, co-creating space,” Wolnerman says. “I was still running the gift box company at the time, so I thought it’d be a perfect spot to work with other small business owners and other entrepreneurs.”

Because it ended up being a large, time-consuming renovation project, Wolnerman says she still wanted to give something back to the Detroit community while Bea’s Detroit was being built in the meantime. Thus, Bea’s Squeeze Lemonade Stand was born.

“I grew up coming to Eastern Market all the time,” Wolnerman says. “This has always been my favorite neighborhood. It just has such a great, you know, history of all these hardworking businesses."

As she fell in love with the land, Wolnerman says she knew the Dequindre Cut and Eastern Market were perfect for her.

“It’s just so much fun on a Saturday with all the hustle and bustle, everyone here is just so nice and supportive,” Wolnerman says about Eastern Market. “So when we opened up Bea’s, which is our co-working cafe and event space here, I just knew this was my home.”

In addition to the cafe, Wolnerman also says the Dequindre Cut is a great place for a lemonade stand.

“I feel like it’s such a cool bike path,” she says. “There’s really nowhere to stop along the whole path. You know, it’s a couple miles long, and you go straight down the river. But when we opened in 2019, there was hardly anywhere to stop. I just thought, it’s a perfect fit with all these people running and biking by. They need somewhere to stop and get an ice-cold refreshment. And really, lemonade is the perfect solution on a summer day.”

Since Bea’s has opened, they have been featured in the USA Today Wine and Food Festival, won Detroit’s Best Foodie Find in 2019, and Local 4 News’ Editors Pick for Best Business Innovator.