Townhouse Detroit is getting a makeover ahead of summer reopening

When Townhouse Detroit reopens to the public later this summer, it will look a lot different.

The restaurant is undergoing a renovation that will see the dark, leather, wood, and Edison lightbulbs of the previous design replaced with a lighter design that uses marble, pink hues, and string lights.

A press release describes the remodel as "a total revamp." 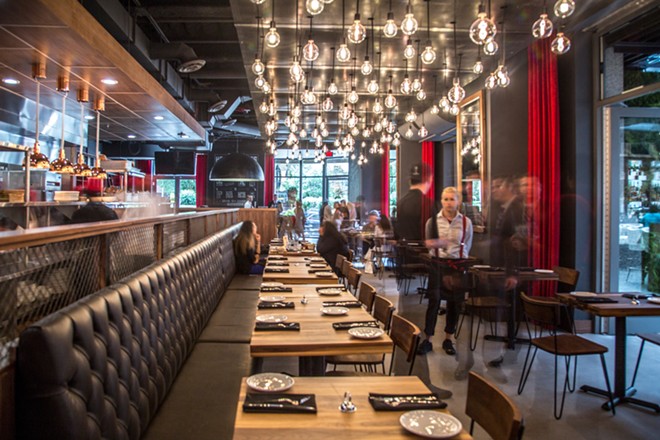 "Six years after its original debut in 2015, the new Townhouse Detroit will be a departure from its former aesthetic, which nodded at the industrial history of Motor City with dark wood accents, polished concrete floors, leather upholstered chairs, a heavy use of metalwork, and mason jar light fixtures," the owners say in a press release. "To elevate the inside into a brighter, more airy space with elements reminiscent of the sophisticated townhouses found in the UK, the Heirloom team has tapped local firm Parini Design to create various dining environments constructed from lighter, contemporary materials."

It adds, "Washed oak hardwood floors, plush seating with the presence of curves, natural accents, and greenery will refresh the opened-up interior — accomplished by the removal of separation walls, the addition of a display kitchen, as well as a redesigned atrium with a retractable roof."

The press release describes the new design as "a welcoming retreat from busy city life, a timeless and elegant gathering place for special occasions, business dinners, and more."

The revamp will also see a retooled menu, which will do away with the comfort food and sushi of the previous incarnation. Instead, the owners say to expect "more seafood and vegetable-forward plates, luxe ingredients like caviar and King crab, as well as an emphasis on wine selections with the addition of a new temperature-controlled bottle cabinet system."

Changes seen in Townhouse Detroit will be reflected in the hospitality group's other restaurants, they say.

The restaurant is owned by Jeremy Sasson and his Heirloom Hospitality group, which also owns Townhouse Birmingham, Detroit steakhouse Prime + Proper, and CASH ONLY, an "ultra-exclusive" invite-only bar in Prime + Proper's basement that prohibits cell phones. An Italian-inspired restaurant Sauce is expected to open in Midtown later this year in the former Will Leather Goods store.

Sasson says he plans to expand beyond Michigan.

"We eventually want to bring the Heirloom way to other markets across the U.S., and to do that, we have to keep growing and evolving as a business, and never accept the status quo," he said in a statement. "We welcome evolution and obstacles, and if this past year taught us anything, it's that we’re up for the challenge."

Sasson and others sued the Michigan health department over its pandemic restrictions, which they argued unfairly targeted the restaurant industry.