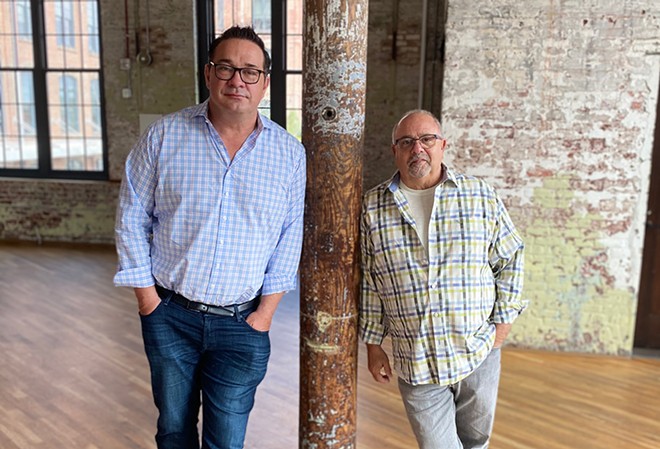 Working in the restaurant and hospitality industry isn’t easy for anybody, with long hours and high stress. And for those struggling with alcoholism, it isn’t any easier with the presence of booze often never far away.

It isn’t just restaurant workers who can have it tough. “I mean, I’m driving around with a car full of wine today,” says Cathy Colombo, who works as a sales rep for a wine distributor in the Detroit area.

Colombo co-runs a local chapter of a support group specifically catered toward people working in the restaurant and hospitality industry called Ben’s Friends, which held its first meeting on Monday, Sept. 13 at Frame in Hazel Park. The meetings are held weekly at 11 a.m.

The group was founded by Charleston, South Carolina-based restaurateurs Steve Palmer and Mickey Bakst, who is also from metro Detroit, in honor of Ben Murray, a chef friend of theirs who killed himself in 2016 after struggling with alcoholism and depression. Since then, chapters have spread to 14 cities across the country, with Detroit’s being the latest.

While the group is geared toward restaurant workers, Michael Barrera, a Detroit-area chef who co-runs the group with Colombo, says it welcomes all.

Still, the two say it’s important for a support group that recognizes the unique struggles of people in the industry.

“When you work in a restaurant, or work in the food service industry, it is, at times, a non-stop profession,” Barrera says. “And what I mean by that is, generally, you are working hours upon hours. There’s an old saying, ‘doctor’s hours, but never doctor’s pay.’”

“And this profession is so different than any other profession because we are around alcohol constantly,” Colombo says. “And it’s acceptable. I mean, it’s a sales meeting for me. It’s 50 bottles of wine sitting on a table. That’s not happening for someone who works at Quicken Loans writing mortgages.”

“You’re working grueling hours, you’re spending more time with people in this industry at work than you are at home with your families and loved ones, you’re missing holidays at times,” Barrera adds. “And you’re constantly surrounded by the thing that is a vice for you. So the support for that, I think it kind of becomes a little bit more needed because of the exposure that you constantly have. And that’s why I think the [food and beverage] group makes as much sense as any do to that.”

Barrera believes the groups have exploded in popularity because the younger generations tend not to drink as much as the older ones did. “I have seen more and more people of that age group in their 20s and 30s now moving away from alcohol as their drug of choice, if you will,” he says. “There’s many other avenues to go, with the legality of marijuana in our state, and other options. But I also think that a lot of these kids grew up with parents who are my age and even a little bit older who did drink a lot. I think that there is not necessarily a fear, but maybe they find it to be a little bit more boring than the other options that they have at this point. I’m not an advocate for anything, or any of that. But I do think that it does have some play. And I do think that there is a different viewpoint on alcohol because there is more awareness to living a sober life, or at least an alcohol-free life, than there was when I was growing up in the ’80s and ’90s.”

Colombo agrees. “I ran into an owner of a distributor at a wine tasting a couple weeks ago, and her and I were both waiting at the bar for a Diet Coke,” she says. “And then we kind of giggled because there was all this open wine, and we both wanted a Diet Coke. So I said, ‘I don’t drink,’ and she said, ‘You know, nobody in the industry drinks anymore.’ She said everybody is quitting drinking. And for me, I mean, I carry a special license with the state of Michigan to have open intoxicants in my car. I will lose so much. I mean, I would lose my job, I would lose this license. There’s a lot to lose if you were to get a DUI.”

The two say the first local meeting saw just two people other attend, including one man in his early 20s. But Barrera says he had more than a dozen people inquire about the next week’s meeting. He believes interest will continue to grow exponentially as the group spreads by word of mouth.

“I think that it’s organically just going to grow,” he says.

While Barrera and Colombo both support Alcoholics Anonymous meetings, they say there are some differences between AA and Ben’s Friends. Group discussions in Ben’s Friends tend to not center around God or AA’s 12 Steps program. “At AA, they request that you do not use profanity,” Colombo says. “We swear a lot at Ben’s Friends,” she adds, with a laugh. “I feel like it’s just a little bit less rigid. It’s a very comfortable environment for anybody.”

“I think AA is an amazing group,” Barrera says. “It’s a group that I got sober in. … That being said, there are some differences. It’s not just religion, or the presence of having a higher power. It’s really focused toward people in our industry for a reason. … One thing that I think is really amazing about Ben’s Friends is that the topics change every single day based on the leader of the meeting. For instance, we will talk about the effect our sobriety has had on our family, or we’ll talk about where we are mentally today, in regards to how we’re feeling. It can be as vague as that, or it can be as intense as, say, what has sobriety done with your relationship with your significant other.”

Barrera says the most important thing is that the group is there for those who need it.

However, he adds, “If we’re helping one person, and we’re providing support and an open door to one person, then we’ve already won.”