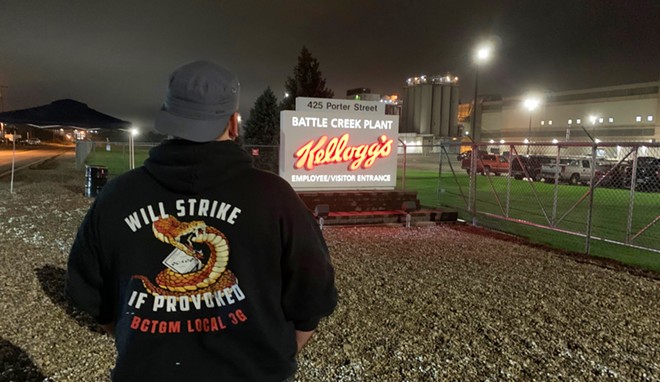 According to a statement from the Bakery, Confectionery, Tobacco Workers and Grain Millers International Union (BCTGM) President Anthony Shelton, the workers are demanding better wages and benefits.


“The BCTGM International Union stands in unwavering Solidarity with our courageous Brothers and Sisters who are on strike against the Kellogg Company.

For more than a year throughout the COVID-19 pandemic, Kellogg workers around the country have been working long, hard hours, day in and day out, to produce Kellogg ready-to-eat cereals for American families.

Kellogg’s response to these loyal, hardworking employees has been to demand these workers give up quality health care, retirement benefits, and holiday and vacation pay. The company continues to threaten to send additional jobs to Mexico if workers do not accept outrageous proposals that take away protections that workers have had for decades.

Kellogg is making these demands as they rake in record profits, without regard for the well-being of the hardworking men and women who make the products that have created the company’s massive profits.

We are proud of our Kellogg members for taking a strong stand against this company’s greed and we will support them for as long as it takes to force Kellogg to negotiate a fair contract that rewards them for their hard work and dedication and protects the future of all Kellogg workers.”


Workers say during the pandemic, they have been forced to work 12-16 hour days, seven days a week, without a day off for months. Thanks to their hard work, business has boomed at Kellogg's, with CEO Steve Cahillane reportedly earning more than $11.6 million last year, according to VICE.

"I’d like to highlight executive level compensation, and the bonuses [executives] received during the pandemic," Trevor Bidelman, a Battle Creek Kellogg's worker and local union president, told VICE. "All of that was made possible because we worked seven days a week 16-hours a day. Now with their greed, they want to thank us by cutting our jobs and making our future workforce have less than what our current workforce does."

In September, Kellogg's announced that it would cut 212 jobs at the Battle Creek plant as it sends jobs to Mexico. Like other manufacturers, the company also introduced a two-tier system, with later hires getting lower wages and fewer benefits. The company has also proposed cutting health care, holiday pay, and retirement benefits for new hires.

According to The Detroit News, Kellogg's spokesperson Kris Bahner said the company is "disappointed by the union’s decision to strike," adding that its workers made an average of $120,000 a year last year.

"There is not a sanctioned boycott of Kellogg cereals by the BCTGM or the AFL-CIO," Christensen tells Metro Times. "However if consumers were to take it upon themselves to vow not to buy Kellogg cereals until workers get a fair contract… that is up to the consumer. 😊"

This story was updated with more information.