by Keith A. Owens 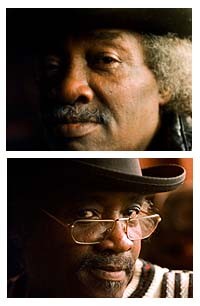 The Butler Twins are right up there with Uncle Jesse White when it comes to representing the authentic, 'down home' style of Delta blues. Not suprisingly, their home base is at the Attic bar in Hamtramck, as is Jesse's. The Twins, as they're referred to in the blues community, have traveled to Europe several times on the strength of their recordings and managed to become a smash hit. Their most recent release topped the charts overseas for a number of weeks which, characteristically for Detroit musicians, exposed them to considerably more fame and appreciation far away from home than in their own back yard. The Twins – that's short for Clarence and Curtis – are a must-see for lovers of the Delta blues.