How Southwest Detroit's 'Blessing of the Lowriders' came to be 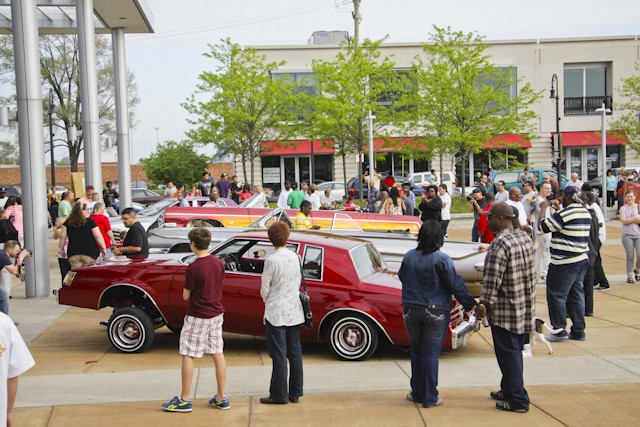 This year, Southwest Detroit will celebrate its 17th annual "Blessing of the Lowriders," a sort of de facto car show that dovetails with the Cinco de Mayo parade. But as founder Victor Villalobos tells us, it's about more than just the cars — it's a rite of passage for younger members of Southwest Detroit's Latino community.

Metro Times: Please tell us about the origins of the Blessing of the Lowriders.

Victor Villalobos: Back in 1997, I had a group of kids who were interested in lowrider bicycles. These were teens and pre-teens. Some didn't even have lowrider bicycles, or bicycles at all — they just wanted a place to hang out with other kids. I collect bicycles. When I would see these young men at the bike shop, I saw they had the same sweatshirt on. They were part of a club. So I asked them about it and they invited me to come check it out. I saw these kids had a lot of passion, a lot of heart, a lot of desire. One of the biggest things they didn't like was that every time they gathered, whether it was a parade, or just hanging out with their bikes, they were thought of by the community as a gang. So that was one of the first things they wanted me to help them with. I joined the club — it was called Royalty Car and Bicycle Club.

So I joined the club, and they wanted me to break that stereotype with them being labeled as a gang. At the time in the late '90s, gang violence and gang activity were pretty high. The thing that I thought of at the time was, "How can I get people to accept these young men?" The only thing I thought of was, you know, to get them to church. But to get a group of kids to go to church is kind of tough. So you have to come down to their level. You have to bring an interest. They're going to ask, "Why? Why do you want us to go to church?" So what I told them was, "We're going to show off our bikes and we're going to get them blessed." We had probably three bikes on the plaza of St. Anne's in Southwest Detroit. Father came out after mass and blessed all the bikes, and the people at mass who were there were kind — they didn't know how to take the kids. They were all dressed alike — what they did wear was a black top and khaki pants, if they didn't have the Royalty sweatshirt. So after mass we all came out and got blessed, and the rest of the congregation at the church started to see new young men and some girls. At that church, there was a falling off of attendance of young people at that time. And also at that time, I was the youth minister at St. Anne's. So tying it together was pretty easy at that point.

You know, when some people dress up for church, and they don't have the uniform — some of them dress pretty ... flirtatious, to put it lightly! Some questionable attire was worn — it was all they had. But from there we just started doing it every May to kick off the lowrider season. I've never owned a lowrider, car or bicycle. But it's more than just the car or bike getting blessed. It's the person that's going to be driving or riding it getting blessed. The Tigers have Opening Day, the lowriders in Detroit have the Blessing of the Lowriders.

MT: I grew up Catholic, and we would get our Easter meal blessed by the priest, and we even got our pet hamster blessed one time. Is there a precedence for blessing vehicles in Catholicism?

Villalobos: I can only speak for what I'm surrounded by, my family. Whenever we got something new that was important to us — a car, a house, even an expensive piece of jewelry — we would go to the priest at church to get it blessed. So I can't speak for all of Catholicism, but with my parents and my family, that's what we did.

MT: So blessing the lowriders — what is that act symbolic of? Are you wishing them safety?

Villalobos: Safety, yes. A good lowrider season. Some of these car clubs are nationwide — like Uso is a nationwide car club, and I believe GoodTimes as well is another nationwide car club. So for Detroit, it's kind of now known — and this isn't what we set out to be — now it's known as the kickoff of the lowrider season. Before it was just trying to get the community to understand young people. And some of those young people now are owning their own business. They're raising kids. They're doing what they have to do — they're great people to have in the neighborhood. 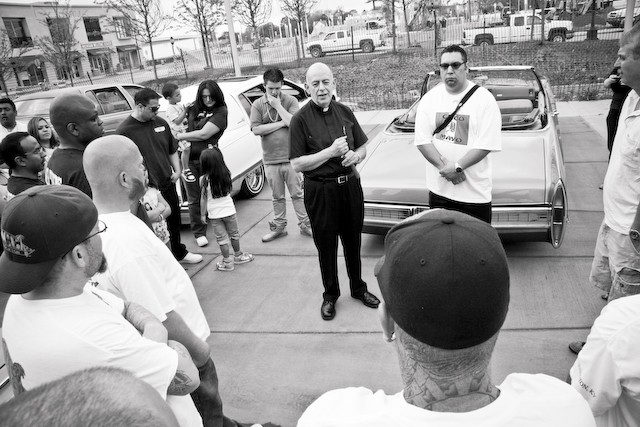 MT: When did it it change from being about lowrider bikes to lowrider cars?

Villalobos: The kids when I first started, they rode bikes because they were young kids. Some of the older, pre-adults I guess, had cars that they were working on. They were always there. Back then, it was probably 75 percent bikes and 25 percent cars. Now because young men are older, I'd say it's turned exactly 180 — 75 percent cars, and 25 percent bikes. Most of the times bikes are temporary — you want to ride a bike until you can afford a car.

MT: So there's the blessing, ceremonial aspect, but it's also a car show, right?

Villalobos: Oh yeah. We try to pick a different location in Southwest Detroit every year. This year, we're at Livernois Avenue and Otis Street. We come and hang out. The blessing is usually at 5:30 p.m., and then we hang out for a couple hours. We have breakdancers there. But it wasn't so much about the cars. The cars are beautiful — the hydraulics systems, the paint jobs, the rims, the stereo systems — those are all great. I drop my jaw just to see some of these vehicles. But it's mostly about the young men that came through it, that are now raising their own families in this culture. They're great people. I believe that this culture has come a long way. They just don't want to be perceived as "bad" people, I guess.

MT: I'm familiar with The Alley Project also. It seems like the idea is to engage youth by speaking their language.

Villalobos: This is my catch-phrase, and my kids who know me from back in my youth ministry days will know what I'm about to say: It doesn't matter whether you're into breakdancing, graffiti, DJing, rapping, basket-weaving, skateboarding — if that's what you're into, that's what I'm into, if it gets you on the right path. I'm not a "Bible-thumper" as they say. The point of the whole thing of getting these young people together was to say, "It's OK to like that stuff." We're just trying to give you a way to express yourselves, in a way that you're not going to be bothered by your peers or authority or school giving you a hard time about it. All day, these kids are told, "Get great grades. Don't be late to school. Come straight home from school. Eat all your dinner. Turn off the TV." With The Alley Project, this is their thing, to let them express themselves in the way they think they need to. And that's all it takes. It takes somebody real to come down to their level to understand them. I found that with all the young people groups that I've been involved with.