The Knight Foundation has announced the finalists of its 2015 Knight Arts Challenge, which are poised to potentially earn a share of $3 million in prize money. The 70 finalists were whittled down from 1,000 responses to the Knight Foundation's question: "What’s your best idea for the arts in Detroit?"

All Knight Arts Challenge grant recipients must raise funds to match Knight’s commitment. The winners will be announced in October; the full list of finalists is below. Check out KnightArts.org for more information.

• 826michigan: Fostering a love of writing in youth at a pretend “robot factory” where Detroit students help humanize the bots by creating stories for them to tell

• Ali Lapetina: Helping students share the world they live in by repurposing a vacant structure into a large-scale camera obscura for gathering portraits and landscapes of the Brightmoor community

• Alicia Diaz: Exploring Detroit’s history as an important way station for both 19th century slaves and 20th century survivors of Central America’s civil wars through, “Tales of Two Underground Railroads,” a series of digital installations and spoken word performances along their paths

• Alise Alousi: Sharing the stories of Iraqi women refugees in Detroit through "1001 Days-Iraqi Women's Stories," a series of writing, drawing and photography workshops that culminate in an exhibit

• Anders Ruhwald: Embracing fire’s destructive and constructive qualities in an art installation where everything inside a Detroit apartment is made of charred wood, molten glass and black ceramics

• Andrea Maio: Helping students tell the stories of Detroit’s east side through a stop-motion animation, collage and puppetry project that brings to life a series of oral histories recorded by 7- to 11-year-olds at the James and Grace Lee Boggs School

• Arab American National Museum: Increasing the public’s understanding of Arab and Arab-American culture through an artist-in-residency program that engages the community and serves as an incubator for new works

• Assemble Sound: Exploring the breadth of talent in the city by pairing 20 local musicians across genres to write, produce and record albums together

• Burnside Farm: Bringing together art and urban farming by expanding to year-round a series of art installations, performances and community dinners at the farm and community space

• rootoftwo: Examining the impact of technology on 21st century life with architectural installations that propose methods for designing buildings, clothes and objects that can evade electronic means of detection

• Michael Stone Richards/College for Creative Studies: Raising the level of discourse around art in Detroit by strengthening Detroit Research, a new journal on contemporary art and culture

• Complex Movements: Bringing Complex Movements’ interactive performance installation, Beware of the Dandelions, which toured nationally with stories of Detroit’s resilience and transformation, back home so residents can experience the stories of other cities it visited

• Corpus: Creating a sense of place through art with a series of murals on Southwest Detroit’s commercial buildings that feature Mexican culture along with news and advertisements

• Cranbrook Art Museum: Bringing “The Truth Booth” to Detroit, an international public art installation of a portable studio in the shape of a giant cartoon speech bubble that compiles video responses to the statement “The truth is…” 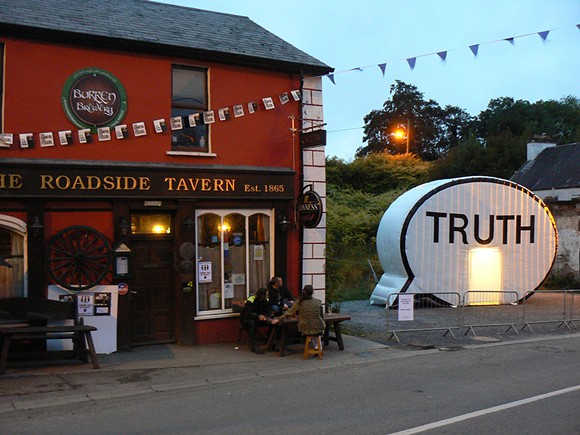 • D.A.N.C.E, Inc.: Inspiring the next generation of performing artists with affordable dance programs for youth interested in pre-professional training

• Detroit Historical Society: Preserving this moment in Detroit’s evolution by partnering with students at the College of Creative Studies to “Re-Document” Detroit in a photo series similar to one done by a professor and students in the 1970s and ’80s

• Detroit Institute of Arts: Reimaging the Osborn neighborhood as an art destination by creating, with the Osborn Neighborhood Alliance, large-scale public artworks

• Detroit Riverfront Conservancy: Preserving the legacy of sculptor Louise Nevelson, who made art from wood scraps left over from heating the apartment she shared with her son, by restoring and potentially relocating one of her works currently owned by the Detroit Symphony Orchestra

• Hatch Art: Activating a public space in Hamtramck by turning an abandoned lot into an art park with pieces that are functional, interactive and serene

• Hamtramck Free School: Sharing the poetry and visual art of imprisoned individuals who meet weekly in a writing workshop by creating a chapbook series that showcases their art and stories

• Heritage Works: Sharing West African traditions with Detroiters by providing a residency for a West African griot who will mentor local artists in the oral traditions of Malian and Senegalese storytelling, resulting in a performance of Detroit stories

• InsideOut Literary Arts Project: Bringing high school students together through written and spoken word with “Louder Than a Bomb,” a statewide teen poetry slam festival that will relocate to Detroit in 2016

• Jett Plastic Recordings: Bringing the work of Detroit musicians to new audiences by helping them record their music on vinyl records

• Keisha McCoy: Strengthening the Detroit Hair Experience, a hair, fashion and art event for Detroiters to share their passions with each other

• Leander Johnson: Creating a deeper understanding of the Jefferson-Chalmers neighborhood by having a school being built in the neighborhood work with local families to document their stories

• Latin American Social and Economic Development: Preserving the mariachi tradition by expanding a program that trains local youth and creating an all-female mariachi youth ensemble to interest more girls in the genre

• McEwen Studio / A(n) Office: Exploring the vacant homes of Southwest Detroit through a research project, "Algorithmic Recitative at MoCAD," that proposes solutions for them that are displayed using interactive media at the Museum of Contemporary Art Detroit

• Michael McGonigal: Sharing the gospel music of Detroit by reissuing several gospel albums produced in Detroit in the 1960s and ’70s

• Michigan Audio Heritage Society Museum: Showcasing the region’s many contributions to music by launching a community radio station and continuing to exhibit the society’s archive of 100,000-plus artifacts

• Michigan Science Center: Inspiring the center’s visitors by transforming a room into a space for vertical gardens and interactive video screens that meld science, technology and art

• Michigan Theater: Building community through the Cinetopia Film Festival by increasing the number of free screenings and events for underserved audiences while expanding the Detroit Voices program for local filmmakers

• Chace Morris: Using poetry and hip-hop to examine the relationship between citizen and city within the context of “RoboCop,” the science fiction film set in Detroit with parallels to life today

• Museum of Contemporary Art Detroit: Expanding the DEPE Space residency program for individuals of any discipline whose work expands the thinking around what is possible when art is used as a change agent

• Oakland Avenue Artists Coalition: Fostering the arts in the North End neighborhood by renovating a building into an arts and cultural center

• Octavia’s Brood: Engaging artists in the city’s future by expanding a salon series that uses science fiction as a device to envision – and ultimately create – a better Detroit

• Opera MODO: Exploring gender through a new production of Bizet’s “Carmen” where the femme fatale is a transgender woman and the performance is set in a minimum security prison reminiscent of the series “Orange Is the New Black”

• Pewabic Pottery: Creating an interactive ceramic experience for all ages through a pop-up clay party that brings a portable kiln to neighborhoods around the city where participants can create a raku pot

• Popps Packing: Turning an unused alley into "The Back Forty,” a creative community space by building a chain of studios – a ceramic workshop, for example or a tool lending library – in the alley, backyard garages and sheds behind Popps Emporium

• The Prankster Press: Creating new ways to perceive and navigate the city through “The Detroit Atlas,” a series of maps that demarcate the city based on a variety of perceptions collected from history, weather patterns, subjective experiences and more

• Scott Hocking: Bringing art into communities by creating illuminated versions of famous paintings and drawings and installing them on the metal infrastructure of rooftop commercial signs no longer in use around the city

• Shara Worden: Engaging audiences by bringing to Detroit a newly-composed modern chamber opera, “You Us We All,” inspired by Beyonce and Bach and commissioned by a rock-influenced baroque ensemble

• Shoshanna Utchenik: Bringing the stories of a Detroit building to life in “Good Bones,” a multimedia performance of shadow puppetry and projections that explores the Sophie Wright Settlement House and its stories of perseverance and evolution

• Sidewalk Detroit: Enlivening public spaces with art through Sidewalks and SideTrails, a residency program that develops and presents walkable performances on the trails of Brightmoor’s Eliza Howell Park

• Signal-Return: Celebrating the art of letterpress, and the growing number of aficionados in Detroit, with "Letterpress Love Fest: Type Takes Over Detroit,” an interactive and collaborative festival of the printing arts in Eastern Market

• Sphinx Organization: Increasing diversity in and accessibility to classical music by providing free tickets to families and community groups and broadcasting on TV and online the annual Sphinx Finals Concert at the Detroit Symphony Orchestra’s Max M. Fisher Music Center

• Spread Art: Providing a space for visual and performing artists to create new works through a three-month residency at Detroit Contemporary

• Stitching up Detroit/Grace in Action: Providing training for teens in creative industries by launching a youth-led, membership-based community print shop focused on screen-printing, design and entrepreneurship

• The Foundation of Women in Hip-Hop: Preserving hip-hop culture and the legacy of Detroit rapper and producer J. Dilla with “Dilla Youth Day,” art and technology workshops and performances that help youth explore the creative potential of cutting-edge software and tools

• Third Wave Music: Bringing together musicians in Detroit at a storefront that sells instruments and accessories and offers repairs and free lessons on playing, do-it-yourself repairs and songwriting

• Tiff Massey: Strengthening the art of jewelry-making through “Detroit Jewels,” a one-month residency for international and national visual artists using metal as their primary medium

• Vito Valdez: Preserving a symbol of local Chicano pride by restoring and completing a mural, the "Shield of Peace and Non-violence," in Southwest Detroit