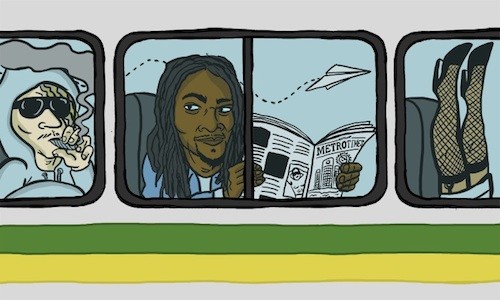 It was about 9 or 10 o’clock at night and I was on the suburban SMART bus toward that great Detroit bus stop hub called State Fair on Woodward, just south of Eight Mile Road. As we approached the station, I remember feeling relief as I saw the 53 Woodward city bus parked in the State Fair lot looking ready to pick up passengers and head downtown. I interpreted this as a stroke of luck — since it’s a hit-or-miss process to transfer from one line to the other — but by the end of this ride I didn’t quite feel the same.

When the SMART finally stopped, I rushed off, ran to the front of the bus, snatched my bike off the rack, and hustled to the 53, knowing this ride would save time and help me avoid the dark unlit stretch of Woodward I would otherwise have to pedal through. There was an inordinate amount of people waiting at the stop, so I knew the bus would be packed and I began to contemplate gettin’ off early if the congestion was too much, maybe make a stop or two on the way.

I mounted my bike on the rack, got in line and boarded watching the bus fill up while standing by the rear door, again in anticipation of an earlier than usual deboarding. As I was thinking it over, these three knuckleheads got on board, all sporting wife-beaters and jean shorts, talking and laughing loud, walking like they owned the bus — you know standard knucklehead fare, which is fine, except I could feel trouble cascading off these fools.

As the bus started to take off, they finally sat down, one behind the other, as the third sat a seat further back and across the aisle. Suddenly, without warning but within my expectations, the one sitting in the front and nearest to me, snapped his head toward the third dude, his relatively short dreadlocks whipping around in anger and said, “I’m gonna fuck you up!”

Now at first he said it with a smile, so I thought he was just playing, but soon his voice got louder and his tone got more serious. He began whipping his head back and forth, looking down at his hands, then to his compadre, then back to his hands again, repeating this motion, as if to come to terms with something he just couldn’t believe. Finally he verbalized what ailed him so greatly, “Nigga sold me a fake dub!”

Now for those of you who aren’t familiar with this term, the brutha was saying this guy either sold him fake drugs or the bag he sold him wasn’t the right weight for the $20 (dub) he paid. Either one is a big no-no. He became more demonstrative; louder speech, punching and clapping his hands loudly, bouncing around in the seat and basically making an ass of himself, talkin’ ‘bout, “I’m’a fuck you up! I can’t wait ta get off dis bus! I’m’a fuck you up!”

Now I’ve seen this cat around, selling and trying to be cool and whatnot, and I said to myself, “This dude is frontin’ like a muhfucka. He ain’t ‘bout to do shit.” He kept carrying on, saying where he was getting off the bus, swearing he was gonna whup this guy’s ass, and the stupidest tell all of all, “I gotta get this work to da house,” again and again while bouncing in his seat like a child that had to go to the bathroom and couldn’t hold it. “Work” refers to the drugs one sells. He was on a public bus. He told everybody where he lived. It doesn’t take a genius to know a brutha tellin’ on himself — STUPID!

All this fool needed was for there to be an undercover cop on board (which isn’t a stretch in the “D”) or a do-gooder with loose lips and he’d be heading straight to jail. I had the distinct feeling that if he did get caught, he’d sing like a bird — frontin’.

I guess he wanted the show to go on as by now he had everyone’s attention and the nerve to stand up to the man he accused of cheating him. He and his buddy sittin’ just behind him both stood up, almost in unison and got in the man’s face, shoutin’ and actin’ like they were ready to throw down for real. The bus driver slammed on the brakes and shouted, “Y’all don’t calm down, you gonna have to get off!”

The lead fool and his doofus homeboy sat back down and of course he continued his overly demonstrative charade, actin’ like this $20 transgression was the end of the world — for attention, of course. In contrast, the dude being accused seemed much more calm, choosing not to get excited by the accusation. That, in no way deterred the fools of this tale.

The two stooges hyped themselves up enough to feel cock-strong, and in unison they stood up poised to charge, but when the other guy stood up and looked down at both of them, they stopped dead in their tracks. He was both taller, bigger and more thoroughly muscled than the both of them, and his calm yet firm look of resolve gave them immediate pause. Not only did they cease their advance, they sat their clown asses right back down, the orders of the bus driver giving them an excuse. When they were all re-seated the third guy even said, “Look man, just calm down and I’ll make it right witchu,” but knucklehead #1 wasn’t having it and went back to his temper tantrum. He was shouting, “I’m’a eat you! Just wait! I need ta get dis work to da house!”

At this point other passengers put in their best two cents to calm homeboy down sayin’ stuff like, “It’s alright, brutha” or “Hold it in, brutha, you’ll get home soon,” but to no avail. The fool bounced a few more times, then swole up and shot up out of his seat yet again, moving aggressively toward big man like he was about to set it for real this time. Big man did the same with the same resolve as before but with an angrier disposition this time around as he was obviously getting to the end of his rope with this irrational idiot. I guess no matter how upset Mr. Loudmouth was, or pretended to be, one more look in big man’s face convinced him to retreat from that point of no return and again, he sat his frontin’ ass down.

Now if I wasn’t sure that I was gonna get off early before, this idiot’s continued non-stop fake-ass antics helped make the decision. By now I knew he wasn’t gonna do shit and began to tire of this charade, part of me relieved and part of me disappointed. I rang the bell to get off and plotted in my mind’s eye how I would react if this little bitch actually and magically grew some balls, as I had a front-row seat to this fiasco. Before anything could’ve jumped off (i.e. big man gets to swinging, because loudmouth wasn’t about to do shit) the bus finally slowed and came to a stop, where I again hopped off, snatched my bike off the rack, mounted my ride and pedaled down the sidewalk.

As I picked up speed toward my destination, I wondered if homeboy ever did avenge his disgruntled self. Ha! I’m sure he found another excuse not to.