The Satanic Temple to unveil 'Baphomet' monument in Detroit 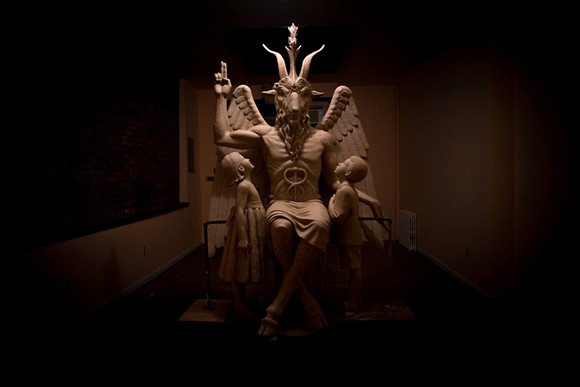 [Updated 12 p.m. July 11, 2015: The event, originally to be held at Bert's Warehouse Theatre, has now been moved to an undisclosed location.]

[Updated 12 p.m. July 3, 2015: The Satanic Temple has taken issue with our description of the organization as an "atheist activist group." They refer to themselves as "non-theistic Satanists." We apologize for the misrepresentation.]

Atheist activist group The Satanic Temple is apparently making good on its mission to erect a statue of Satan, originally intended for an ultimate destination next to the Oklahoma State Capitol's monument of the Ten Commandments. In fact, TST plans to unveil the completed statue for the first time in Detroit next month.

Why Detroit? Last year, the group chose Detroit as the location for its first national chapter house. "Detroit is our first and primary chapter," spokesman Doug Mesner says by email. "We feel at home in Detroit."

The group of culture jammers pushes for a separation of church and state by distributing Satanic literature and fighting to be included alongside displays of Christianity on state grounds. Last year, the group erected a small temporary holiday display on Lansing's Capitol lawn when it was announced that a Nativity scene was being proposed for the location.

The finished Oklahoma sculpture depicts "Baphomet," Satanism's winged, goat-headed icon. In a press release, TST calls the bronze monument — which weighs one ton and stands at nearly nine feet tall — "already the most controversial and politically charged contemporary work of art in the world."

While Oklahoma's Ten Commandments statue was destroyed last year after being run over by a car, it was swiftly replaced in January. Meanwhile, the group's request to place the Satanic monument on the same grounds has not been granted. Mesner tells us that the Satanic Temple is currently gearing up for a lawsuit against Oklahoma; it is expected to be officially filed before the unveiling event.

In the meantime, the statue will get an unveiling party on Saturday, July 25 in Detroit. The party starts at 8 p.m. Tickets are $25 and $75 for VIP and available for purchase online.

VIP ticket holders get an exclusive opportunity to be photographed with the statue, receive a limited edition poster, and "an opportunity to meet and greet with TST Executive Ministry," according to a press release. "Cocktail attire" is encouraged — "dress to impress the devil."