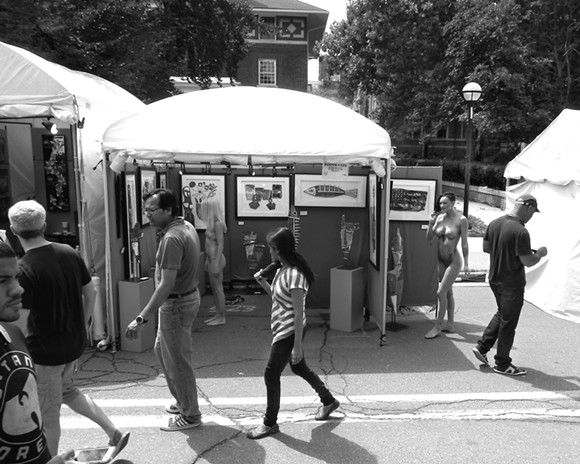 Just like he said he would, Ann Arbor-based photographer Harvey Drouillard shot nude models right in the middle of the Ann Arbor Art Fair, a tradition of his for 21 years.

Timing is everything in photography, and the art behind Drouillard's images is not just in the formal aspects of taking a picture but in the logistics of getting nude models in a public place before causing a commotion — oftentimes the background subjects in his photos have no idea about the presence of the nudes, which creates an intriguing tension. Drouillard has volunteers on the lookout for cops (and more importantly, for kids) before he signals to the models to disrobe.

This year was different in that Drouillard says he drove straight up to Ann Arbor after shooting for five straight days in Cincinnati, Ohio, where he was trying to beat his previous record for most nude subjects in a single frame for an ambitious planned shot at Tyler Davidson Fountain. (The record — 19 — still stands to be beat. Out of 60 original volunteers, only nine showed up. And when Drouillard were ready, there were 27 cops waiting, thanks no doubt to an interview he did on a local conservative radio talk show.)

Drouillard dropped us an email to give us an update:

I departed from Cincinnati, Ohio today at 6:21 a.m., just coming off a five-day shooting spree during All-Star week. After getting gas and a coffee I drove straight to Ann Arbor. I arrived at my front doorstep at 10:35 a.m., exactly 20 minutes later, while I was unloading the car, the first volunteer showed up for the annual Ann Arbor Art Fair shoot. Approximately 30 minutes later the second volunteer arrived, and training began. Due to a slight miscommunication about the location of an art fair booth, the first actual photograph didn't occur until approximately 2:30 p.m. at Kimmy Cantrell's booth on State Street near the student union building (Booth #523). I was tipped off to this artist by a good friend of mine who is a fan of Cantrell's work and said I should check it out while I was at the fair. I have never met Mr. Cantrell before and I'm pretty sure he did not know what was going on because he seemed very surprised when the woman in his booth dropped her dress. As he backed out of his booth, exercising the manners of a gentleman, he was met with the second nude volunteer who surprised him even more! This one has a all the ingredients I look for in a "Harvey" photo. I also had the opportunity to shoot a couple iconic landmarks that were not art fair related.

I couldn't resist shooting the cube, it's the location of the finish line of the famous naked mile, most likely the location in Ann Arbor where more nude people have assembled than any other place! I was also able to get a really cool shot inside the law library, on the way to try to shoot Dominick's (we ran out of time). One of the volunteers had to get back to Oakland County by 5, so we made our way back through the fair, to put the proverbial icing on the cake. We stopp ed off at Jerusalem Garden's new location (in the old Seva building) on liberty Street and got a real doozy while racing back to our car.

Just 24 hours before his first shot in Ann Arbor, Drouillard took this photo of a woman walking dogs at Cincinnati's 21C gallery.

While in Cincinnati, Drouillard wound up attending a party hosted by Drew and Andy Lachey (you know, from boy band 98 Degrees) premiering a reality TV show about their new bar. "Right before the party, some car was parked illegally out front. I don't know why they made such a big deal out of it," Drouillard says. "Drew was just talking to the cops about his show. Then these two women, they actually had their butt cheeks pressed right against the car while there's three cops talking to Drew."


Drouillard finally got his fountain shot around midnight, but with just one lone model. He says he remains optimistic about breaking his previous record.

"I'll never break it if I don't keep trying!" he says.