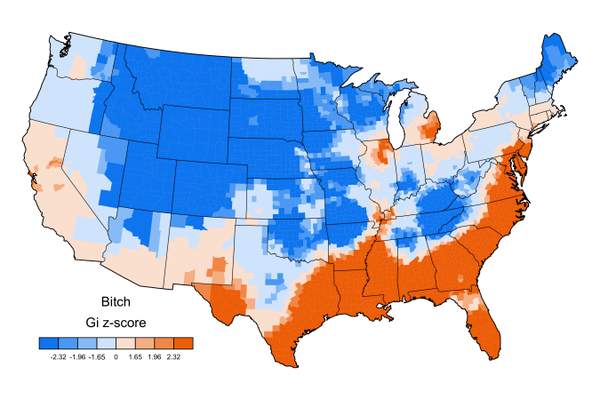 Longtime Metro Times readers know we love our swear words. That's why some recent maps by the U.K. linguist Jack Grieve are of particular interest to us.

Grieve, a professor in Forensic Linguistics at Aston University in England, tweeted out maps of the U.S. showing which swear words are most popular in each state. To make the maps, Diansheng Guo at University of South Carolina collected almost a billion tweets from Oct. 2013 to Nov. 2014, totalling nearly 9 billion words. They then analyzed the tweets using geotagged data.

We take that raw map and smooth it using a hot spot analysis (a Getis-Ord Gi local spatial autocorrelation analysis).

Check out the maps below.

The fuck map...we've never seen a word map quite like this.... pic.twitter.com/qIsWChETGq

Alright, let's keep going: the Bitch Map. This and Shit have a similar and common pattern (see other maps below). pic.twitter.com/4KiC3iaFkp

So pretty much everyone's swearing. We just don't all prefer the same words. The Asshole map. pic.twitter.com/kn65kIHPaa

The Motherfucker map (as one word) pic.twitter.com/rsCYvrIPex

I hesitate to post this. We're doing some work on slang for a news outlet & they say any word is cool except this. pic.twitter.com/TmCh1ptoCf

The damn map...hydro-electric polysemy doesn't seem to be skewing things too much at least http://t.co/iIRD4Cl5Ey pic.twitter.com/l15141jb9V

The Darn map. I know, I know, I should be mapping damn/darn alternation for the variationists out there but fuck it pic.twitter.com/XSRB3vBYS4

The Hell Map...notably lining up with Shit etc rather than Gosh... pic.twitter.com/KZaicoN4sc

...and then the whore map, very similar to slut...I guess I'll need to run hoe next pic.twitter.com/M9zwn6xRrI

Last one for now: the Fuckboy Map. Also one of the fastest rising words in 2014 http://t.co/s6uH5ZHaUz pic.twitter.com/LJ8gCTYQHg