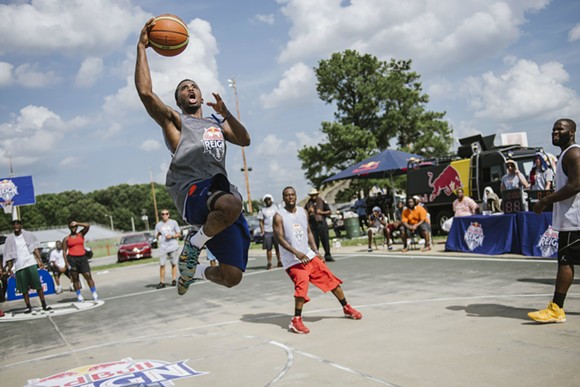 In continuing with Red Bull's tradition of staging offbeat sporting events in Detroit, the brand will bring its 2015 Red Bull Reign to Detroit this Saturday, Aug. 8 at Joe Dumars Fieldhouse. The Red Bull Reign us a 3-on-3 basketball tournament that will pit 20 of Detroit's best basketball trios against each other. Teams that score the most overall points in each round will advance and continue to compete. Winners of the Detroit event will get a chance to compete at the Red Bull Reign Finals in Chicago on Aug. 22.

Registration has closed, but the event is free and open to the public to observe. Joe Dumars Fieldhouse is located at 1120 W State Fair in Detroit.

Red Bull is inviting America’s top ballers to put their skills to the test in the second annual Red Bull Reign 3x3 tournament. With several regional contests taking place throughout the United States this summer, the unique 3x3 basketball tournament will pit hoop hopefuls against one-another in a high-endurance, offensive-driven battle that ends with the finals in Chicago.

The seven qualifiers will be held in Houston (June 20), Oklahoma City (June 20), Memphis (July 11), Indianapolis (July 25), Cleveland (August 8), Detroit (August 8) and Chicago (August 22). The winning team from each location will be invited to battle in the Red Bull Reign Finals at Chicago’s Seward Park on August 22, 2015.

The rules of the high endurance, offense-driven tournament are simple: the teams that score the most overall points in each round will advance and continue to compete. Red Bull athlete and Chicago’s very own, Anthony Davis, will host the Red Bull Reign Finals and present the Championship trophy at the end of the day.

The qualifying tournaments and Finals competition are open to the public and free of admission. Ballers 18 and older can submit an application for their team of four players to compete. The Red Bull Reign committee will review applications and select participants, notifying teams two weeks in advance of each tournament. More information including team registration, exact locations and times can be found at redbull.com/reign.