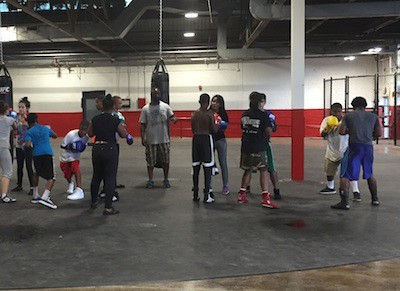 Just after opening up their new home, the Downtown Boxing Gym in Detroit has announced that the Marshall Mathers Foundation will offer a matching gift to its online fundraiser and contribute special prizes for those who donate, raising both money and awareness for the community center and program for Detroit youth.

Eminem is offering 10 of his sold-out signed boxing gloves from Title that tie-in with the recent Jake Gyllenhaal-starring film Southpaw, whose soundtrack Eminem executive produced. A $10 donation that benefits the Boxing Gym’s after-school program enters you into the fundraiser, with one grand prize winner also getting a handwritten letter from Shady himself.

The Downtown Boxing Gym, for those who don’t know, combines its boxing program with academics and community service to help Detroit Youth graduate high school, go to college, and connect with the community. The gym just moved out of its 4,000 square foot gym and into a newly renovated 27,000 square foot complex. Though the new facilities are impressive, there’s always more that can be done to help out. The gym’s campaign goal is to bring in enough funds to support adding 15 new students to its program, but there are currently over 500 on the waiting list.

Donate to the fundraiser before August 31 to ensure that your funds are matched. The link to do so is right here.