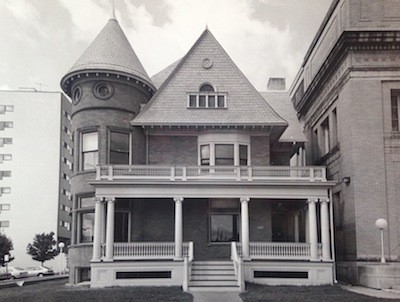 David Mackenzie is literally a towering figure in the history of education in Michigan. (I do mean literally — drop by the Mackenzie House for a tour sometime and see his enormous clawfoot tub.) Born in Detroit in 1860, Mackenzie left his mark all over the state — in Flint, where he was an energetic and popular superintendent, and in Muskegon, where he founded the Hackley Manual Training School, a center for students to learn industrial arts such as woodworking and printmaking. When Mackenzie returned to Detroit in 1904 to take a job as principal of Central High School, his reputation for brilliance preceded him.

At Central, Mackenzie made his most enduring impact: in 1917, a few years after he introduced college-level courses for recent graduates, he unveiled the Detroit Junior College, a two-year post-secondary program. Mackenzie had met amazing students in his high school classes who had no chance at college — they couldn't afford it, or they had to stay close to home to work and support their families. The Detroit Junior College gave them an affordable higher education option in the city — and a chance at a better life.

It was the first junior college in Michigan, and Mackenzie became a nationally recognized advocate for the junior college model. In 1923, the Detroit Junior College received four-year status and became the City College of Detroit — one of the original colleges that became Wayne State University, founded when several independent colleges were united in 1934. Wayne State's Old Main is the former Central High School building, where the Detroit Junior College began.

Old Main is a beautiful physical connection between what is now one of Michigan's top research universities and what was then an experiment, led by a tall teacher with big ideas. But just a block away, there's another, humbler landmark to David Mackenzie's legacy: his home, built in 1895 and designed by Malcomson and Higginbotham, the same architects who designed Old Main. Architecturally, the house is packed with beautiful details — three fireplaces with Flint Faience tiles, birdseye maple pocket doors, a slate roof, a turret window that admits soft daylight into the bedroom. It's also an imaginative bridge to the past, and one of the few remaining buildings with roots in Wayne State's founding. Mackenzie met with students in his study, hosted guests in his parlor with his vivacious wife Esther, and hung out in the summer on his big front porch. When he died in 1926 at the age of 66, his funeral was held at the house; a cortège of 50 students lined the porch and the sidewalks as the pallbearers carried the casket down the front steps.

Forty years later, we are still fighting to preserve our history, our memories, and our places to imagine and reflect. We are fighting for these intangible things, and for historic buildings that are also engines of economic development — great places to start businesses, open offices, or have coffee or a meal. Mack House is a place where a notable man slept, as well as an architecturally interesting and beautiful building, but these are not the only buildings that are important to us. We're out to save the parlors where family funerals were held, the bedrooms where rocking chairs rocked, the kitchens where meals were cooked, the offices where plans were hatched. We're out to save the places that give our city a sense of itself. This year, we helped save the Eddystone Hotel, on the edge of the new hockey arena. Next year, we hope to protect the smaller and more eccentric apartment buildings, houses, hotels and office buildings around the arena, as we advance the designation of Cass Park as a local historic district.

It's a fight with ample frustrations and losses, as it has been since Penn Station fell, and long before. The inventory of great buildings Detroit lost before our historic preservation ordinance is pretty somber — Old City Hall, demolished in 1961, comes to mind. And since then? Well, name your own painful loss — maybe it's Hudson's, Tiger Stadium, or the Lafayette Building. (Mine's First Unitarian, which burned down in a suspicious fire last year.) But when it all feels futile, I think about Allen and Marilyn and their victory for the Mackenzie House, which dominoed into so many other victories for Preservation Detroit. And I think about tall, nerdy David Mackenzie, who hated jazz music ("too vulgar") and studied Sanskrit, and his house on Cass Avenue, which meant the world to generations of students, and still does to me.