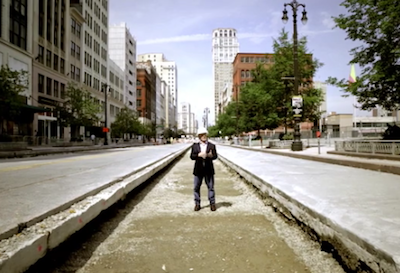 In metro Detroit, we have our fair share of people who doubt any mass transit project. Propose billions of dollars to fund decades-long projects to expand freeways and you seldom hear a peep out of these folks. But should anybody choose to fund rail with a minuscule portion of the federal transportation funds the region receives, and you hear cries of “People Mover 2!”

And, given the fact that the downtown loop was intended to be the hub of a regional rail system that never materialized, yes, it’s not living up to its full potential. But it’s not due to some problem particular to rail transit. So goes the reasoned discussion on the issue.

Or, you can jettison all that and just join the hatefest. M-1 Rail is going to be People Mover 2, right? It’s going to be a white elephant choo-choo train that will be trashed more quickly than a Porta-John stocked with Sharpies at the Gathering of the Juggalos.

Agree with this grim scenario? Then there’s a bit of clickbait written just for you. It’s a piece that includes the M-1 project among its “Three Dumbest Public Transportation Projects Underway in North America.”

Then again, you also might steer clear of it. As far as takedowns of questionable public works go, this one is pure amateur hour. The piece’s flaws include the fact that the Time magazine story it links to seems to be dated wrong (the People Mover opened in 1987, not 2005). The video is outdated, referring instead to the 8-mile-long vision, which was scuttled. That was a proposed public transportation system, while M-1 gets much of its funding from private donors, so you wonder if the libertarians over at Reason magazine still oppose it. (They oppose government doing anything, yet always find a silver lining when the funding is private.)

Also, M-1 a will “serve a nearly deserted part of a bankrupt city”? Does this look deserted?


What’s more, Detroit has cheap and affordable downtown parking? Maybe compared to some cities. And you gotta love the way these people will cherry pick one article from the libertarians and another from the Atlantic’s City Blog. You know: Just toss whatever you can find in a 15-minute Google search against the wall and see if anything sticks.

In short, if you want to harsh on M-1, this may not be the takedown you want to embrace. There may be many valid complaints about M-1: The curbside rail, the closely spaced stops, the way critics say it’s a parking shuttle for downtown’s real estate barons and not a true mass-transit system. Pull together those complaints and you might have a compelling argument that all is not well with this system.

But some people just don’t like any public investment at all that involves steel wheels. And that’s probably what’s driving this screed.