Lately, at night, around half past 8, I get called upon for a special duty I enjoy: Reading bedtime stories to a 7-year-old boy. It’s a great way to turn down the lights and get the kid relaxed for a long snooze. And since I’m such a pack-rat, I went digging through my childhood books to see if anything from my childhood appealed to him. Mine were mostly picture books, and that interrupted the flow because he wanted to see every illustration. But I did find a few volumes of children’s stories from my childhood that were too old to have more than one or two images.

And that’s where things got interesting: I found three original volumes I’ve had since forever of the stories of Thornton W. Burgess, the “Mother West Wind” stories. They were old when I read them as a child: They’re from 1915, 1916, and 1917. So far, the boy likes them, and reading them has been an interesting experience for both of us. We’ve discovered (and rediscovered) such settings as the Smiling Pool, the Laughing Brook, the Green Forest, and the dear old Briar Patch.

It’s a fictional world populated with familiar animals, from Old King Bear down to the naïve and always-curious Peter Rabbit, who is continually begging stories from the creatures of the Green Forest and the Green Meadows. And so each tale is a story in which a character tells another story, which is always an origin story, such as “When Old Mr. Bat Got His Wings,” “Why Mr. Snake Cannot Wink,” and “How Old Mr. Toad Learned to Sing.” At the beginning of the narrative, Peter Rabbit will wonder why a bird lives on the ground or an animal digs a hole for a home, and he will seek out the counsel of an animal who might know.

That’s usually Grandfather Frog, a churlish old soul with a heart of gold who lives on a lily pad in the Smiling Pool, where he eats “foolish green flies” all day long. I love reading the stories with Grandfather Frog, and will adopt a gruff, deep, old codger’s voice for his lines. (He’s that fun a character to play.) This sage of the lily pad is given to the utterance “Chug-a-rum,” especially before telling a yarn that’s always set “a long, long time ago, when the world was young,” back when the “grandfather a thousand times removed” of today’s creature did the things that made today’s animal live as it does.

That’s when Old Mother Nature had just breathed life into the animals and placed them into their little part of the Great World. At first, times were good, and all the animals had plenty to eat. Then came “the hard times,” when Mother Nature was too busy tending to other places in the Great World to care for them. They began to eat one another, and had to adapt to the changing circumstances to survive. The dialogue can address this mortal danger frankly. In “When Old Mr. Badger Learned to Stay at Home,” Old Mother Nature tells the creatures:

The Great World is new. There is a place in it for you, but you must find that place for yourself. There is work for you to do, but you must find out for yourself what it is. When you have real need of anything come to me, but don’t bother me until you do have. No one who proves to be helpless or useless will live long. Now run along and prove whether or not you have a right to live.

I suppose that’s pretty strong stuff for a 7-year-old these days! But he apparently enjoyed to the tale of the plucky animals fighting the hard times. (And it’s not a bad allegory for the dog-eat-dog world he’ll likely have to face one day!)

You see, Burgess wrote fables; his stories had a moral message. But they run on the moral code of a century ago, back in the waning days of laissez-faire capitalism, and it’s definitely not all happy-fun-time there. In this moral universe, outright villainy is bad, of course, but so is laziness, and even whining: Those who complain and shirk their duties don’t get respect. But the flip side of this is that the actual virtues extolled are simple and rather humble: thrift, modesty, bravery, honesty, even mutual assistance. For the most part, these animals aren’t flashy, certainly nothing like today’s venture capitalists or rock stars: They’re mostly humble little people, the best of whom strive for the common good. They come in all shapes and sizes, and the community makes its heroes of anybody willing to bear some burden for their collective welfare, even the small or humble-looking.

Ultimately, it’s an upbeat message: Bring out your natural talents, do what you can, and you shall not perish. And nobody who quietly tries to improve himself will be completely abandoned by Old Mother Nature. Should he fold his hands and not do anything … well, something bad will probably happen.

But, of course, there’s some pretty dark stuff in there, and it does give me a bit of pause. The “hard times” aspect of the stories is central to them. Take away the hard times and you wouldn’t have the stories. And the privation and suffering of those times is often the impetus that prompts an animal to find an unusual ability that secures his place in the world. An animal’s true character blossoms during the hard times. 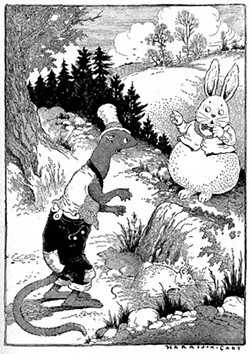 That doesn’t always have a pleasant outcome, though. Some animals become outcasts of the animal community, for killing, stealing, dishonesty, and other sins that violate their standards. In one story, Mr. Weasel pretends only the larger animals are carnivores, until he’s caught making a meal of young mice — and the scene is illustrated on a page by Harrison Cady, with two dead mice, a horrified rabbit, and a very guilty-looking Mr. Weasel. (I haven’t showed the boy that page!)

It’s sort of strange to read these chapters, in which the storyteller condemns an animal’s heritage as one of stealing, sneaking, or other trickery. I wonder if a faint ghost of class determinism (or something worse) haunts those pages. And yet, there’s usually a good lesson about shame and isolation, verbalized by Peter. At the end of one such story, he laments, “Isn’t it dreadful not to have a single friend? I would rather run for my life twenty times a day than to be hated and feared and without a single friend. I wouldn’t be an outcast for all the world.” That’s not a bad lesson.

In fact, the moral standards are so high that even Peter Rabbit fails them: He can be brought to task for being self-centered, foolish, and just plain wrong. If that sounds severe, it isn’t: the give-and-take between elder and young is all part of the story. Grandfather Frog, the stand-in for the adult, shows a bit of good-natured leniency sometimes, and Peter often tries to flatter him when the old man is in a foul mood. The elders deserve respect, and the young also deserve understanding. But if Peter Rabbit runs in on Grandfather Frog in a disrespectful way at the wrong time, the old guy can be pretty tart-tongued.

In fact, one time Grandfather Frog’s blunt manner nearly derailed our story-time. In one tale, Peter asks Grandfather Frog why possums play dead, the green sage teases him, saying: “Just to fool people, stupid.” When I read this, the boy erupted in laughter and thought I had made it up. He actually demanded the book, to see that the outrageous word “stupid” in ink on paper. I showed him. He laughed harder. I hadn’t realized “stupid” is practically a swear word now.

So there’s some tough stuff in these stories, and the morals are a little fusty, but I’ll continue reading him these old stories as long as he likes to hear them. Maybe they’ll help prepare him for the battles young people seem to be facing these days. Personally, I hope by the time he comes into adulthood that our society doesn’t have “hard times” anymore — and then I guess we can all watch Barney and Elmo all day long. But the world out there today seems full of tough choices, and I like the idea that these stories deal with that in some way. Maybe he’ll grow up knowing you can still make good decisions when everybody’s playing for keeps.

Or, hell, maybe all he’ll remember is “Chug-a-rum.”

I do not write all this as some indictment of contemporary culture and some of the more bubble-wrapped literature marketed toward kids today. There may be some very candid children’s books out there I don’t know about, and even fluff like Elmo has its place I guess. I only wanted to share this unusual time warp I find myself in around 8:30 p.m., right here in the moment, and way back when we might have been a bit more frank with children about the hazards of life — though sweetened with the knowledge that the help of adults and allies is always there for those who deserve it.