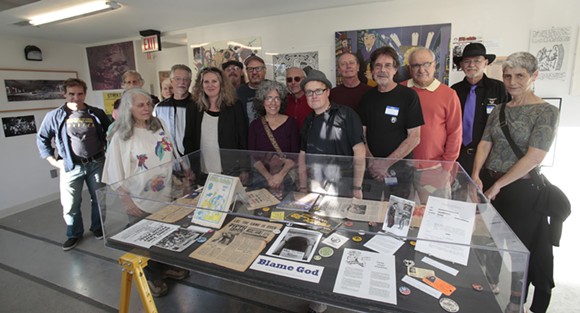 Long before Metro Times, the Fifth Estate was serving up opposing viewpoints to Detroit's mainstream media. Today, the countercultural magazine is still going strong, having celebrated its 50th anniversary on Nov. 15.

The occasion was marked with a retrospective at MOCAD's Mike Kelley Mobile Homestead, which closes Sunday. Titled You Can't Print That! 50 Years of the Fifth Estate, the exhibition takes a look at the magazine's founding and history, its impact on the local media, notable alumni, and more.

The exhibition has a closing reception from 1 p.m. to 5 p.m. on Sunday, Jan. 3, 2016, which is free and open to the public. Refreshments will be provided — as well as free back issues of the Fifth Estate, while supplies last. There is also an opportunity to purchase the new 50th Anniversary Winter 2016 issue, the 40th anniversary issue, T-shirts, photography by Leni Sinclair, and posters by Gary Grimshaw.

Need even more Fifth Estate? Start the Presses: 50 Years of the Fifth Estate, a parallel exhibition, is on view at the Detroit Historical Museum until August 2016.