Updated: 'Plagiarism' controversy a sign of a larger problem at the Free Press 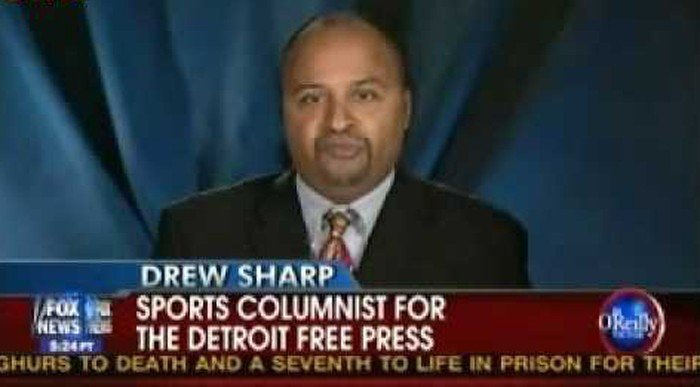 Detroit's sports bloggers are crying foul after it was revealed that Free Press columnist Drew Sharp borrowed heavily from a story by an independent blogger without attributing his source.

But while some are calling for the Freep to fire or suspend Sharp, we're going to wager nothing will happen.

Spiros characterized Sharp as committing "journalism’s biggest sin." David Harns, the author of the original story, later came forward with his own take which confirmed that Free Press editors were aware of Sharp's lack of attribution. (Of course, "journalism’s biggest sin" is probably hyperbole here — though longtime DSR readers know hyperbole is the site's bread and butter, as the site's writers seem to revel in creating drama out of Detroit's typically blah sports media landscape.)

As Deadline Detroit points out, Sharp's mistake wasn't so much plagiarism per se as much as it was failing to cite a source — a problem that has since been remedied by updating the story to include very clear citations. And it certainly doesn't equate to the sin of straight-up fabrication — as in the case of Freep columnist Mitch Albom, who seemed to emerge from an infamous 2005 fiasco unscathed, save for a suspension.

But one of the biggest reasons we don't see Sharp facing any repercussions is because what he did seems to be par for the course at the Free Press.

Steve Neavling, the independent blogger behind Motor City Muckraker, worked at the Free Press for six years. He says that not attributing other publications is just a part of the editorial culture at the paper.

"The editors were very adamant that we do not attribute other publications because of an unreasonable fear that people will realize there are other publications reporting news," Neavling tells us. "It was very frustrating and almost paranoid. Since I've left, Free Press reporters have taken dozens of my stories and rewrote them, without giving any attribution whatsoever. It doesn't surprise me at all that a reporter finally got caught stealing a story without attribution. It was only a matter of time." (Neavling has published his own report about the Sharp controversy.)

If anything, if Sharp is let go, we're guessing it would be for a well-established reputation for kind of being a troll. Then again, it's possible he already was suspended or let go: his last story was published on Dec. 24. Whether Sharp is on a holiday break is unclear. Neavling says he has emailed Free Press editors about the story every day since the news broke, but they refuse to comment.