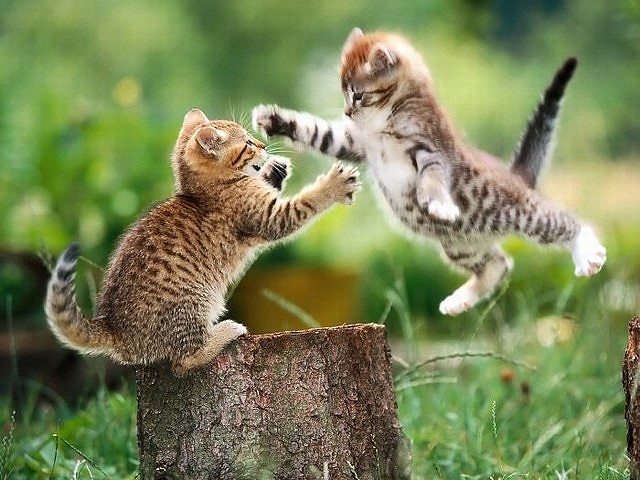 Ok, calling it a war might be a little much, but one homeowner in Birmingham is raising concern over her neighbor's cats. It's been reported that on Monday, Patricia Lang, a self-described cat person, addressed the City Commission stating, "They stare into the windows and cause my cats to go absolutely crazy. They feel like their territory is being invaded.”

Lang claims her neighbor's cats hang out her yard and taunt her cats (whose regal-ass names are BillyBob, Lilliana Leticia, and Monsieur Pepper) and wants something to do be done. “Let’s include cats in the ordinance for disturbing the peace at the very minimum,” she said.

Though cats have a long history of not giving a fuck, Lang seems to think legal action is the way to go to. In addition to imploring the commission to create an ordinance — which they are actually considering — she's filed a police report and had officers dispatched numerous times to the neighborhood.

But let's be clear: she's not out to cause a ruckus, she just wants the best for BillyBob, Lilliana Leticia, Monsieur Pepper, and all of the cats around the world. “I’m a cat person, so the last thing I want to do is create problems for another cat owner,” Lang said. “I love cats and I want them to be well cared for and I think the best place to do that is inside.”

(Full disclosure: the writer believes cats are covert assassins and believes this to be just another example of their conspiracy to end us all).

Be sure to check back for more details on #BhamCatFight16