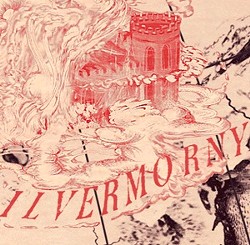 There was a BIG announcement in the world of Harry Potter last week. Brand new writing by J.K. Rowling revealed information about four previously unmentioned international schools of witchcraft and wizardry, including one in North America called Ilvermorny.

While complete descriptions for three of the schools were provided, not much was said about Ilvermorny, and according to one self-described impatient fanboy, it's most definitely going to be revealed to be in Detroit.

The fan, a 13+ year veteran and managing editor in the publishing industry named Tom, writes on his site,

"All we got was a name and an illustration of the school, shrouded in clouds, hovering above the Great Lakes region. And that got me excited because I’m from the Great Lakes region. Specifically, I’m from Detroit, one of the most notorious and misunderstood cities in North America, and I personally think that Detroit would make a TREMENDOUS home for Ilvermorny. I really do. I think that wizarding academy has been here all along."

Tom also took to Twitter and made a strong case for his theory.

Why #Ilvermorny Should Be in #Detroit: The US Congress recognizes nearby Colon, MI as the "magic capital of the world." Not making that up.

Why #Ilvermorny Should Be in Detroit: The name could be a mash-up of the sILVER Bullet Band and Brand New MORNing, both Bob Seger references

Why #Ilvermorny Should Be in Detroit: Detroit makes magical things. We're makers, tinkerers. We're experts at making the abstract real.

Why #Ilvermorny Should Be in Detroit: Guess who died in Detroit? Harry Houdini. Vengeful wizards didn't like a non-maj trying to debunk them

Why #Ilvermorny Should Be in Detroit: It appears to be a ruin to Muggles, but people in the know can see what it really is.

We've gotta side with Tom on this one. We like the idea of magic happening here.