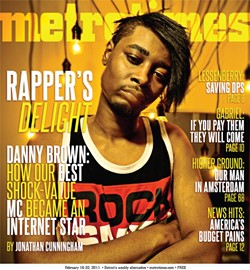 Danny Brown made an appearance at SXSW this week. It wasn't to perform because nope, but rather as a willing participant on the magnificently titled 'Rap Warrior Ninja' sketch on The Eric Andre Show.

Now, in case context isn't your strong suit, the sketch is essentially what happens when rappers get pitted again one another American Ninja Warrior-style. As prefaced by Andre, "there's no teams, no uniforms, just a bunch of rappers."

For Danny Brown and A$AP Rocky, this meant trying to freestyle while tip-toeing blindfolded through "soiled underwear" and across "mouse trap plank, ball swing alley and snake pit."

And if that doesn't pique your interest, there's also a moment where Andre's sidekick Hannibal Buress yells "KEEP RAPPING!" at Danny Brown, who then gets hit by a foam lance.


If The Eric Andre Show wasn't already your thing, it certainly will be after watching this.