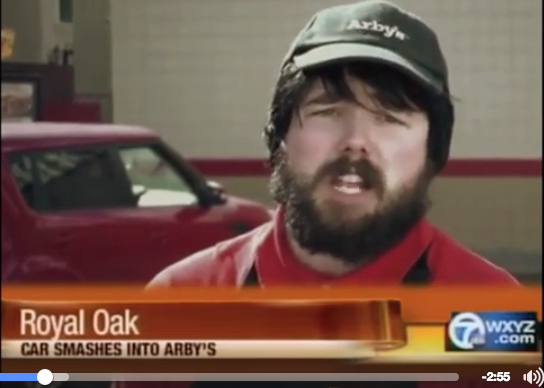 One of the greatest things about the Internet is the ability its given us to see eyewitness accounts of somewhat dangerous/tragic situations.

Sometimes when someone's house burns down, the 30-second clip of the neighbor saying ridiculous shit is what winds up at the top of every Newsfeed, and then in the best cases, remixed.

Well, in this case, the "news" we're "reporting" on isn't the fact an elderly woman drove into an Arby's, potentially endangering herself and many others — as you'll hear, it was a "VERY POPULAR ARBY'S" — but rather, we're here to tell you about the Arby's employee whose account of the event is the greatest thing we've ever heard.

Watch it for yourself.


Weird Arby's Employee Describes An AccidentSource: https://www.facebook.com/BowserVids/ CHECK HIM OUT!


Ready for the curveball? Hope you didn't tune out after the first two minutes, because here's where it gets good. This isn't even a real video!

Soon after Bored At Work launched the video into viral-dom, the WXYZ news reporter featured in the video chimed in on Facebook.

But of course, some were skeptical.

And there were a few who felt it their job to verify the reporter's identity.

OF COURSE, some know-it-all has to step in and ruin the fun.

But then someone just chalks it all up to a grand American shenanigan and everyone gets a good laugh.

And of course, there's this guy.

Pleasure internet-ing with you! This has been meta.